Here is located one of the most ancient fortress in the world. The Tuprak Kala fortress is the capital of ancient state of Khoresm. It was built in I-IV centuries AD and now it is located on site of Ellikqala District. Name is translated as "dirt fortress". 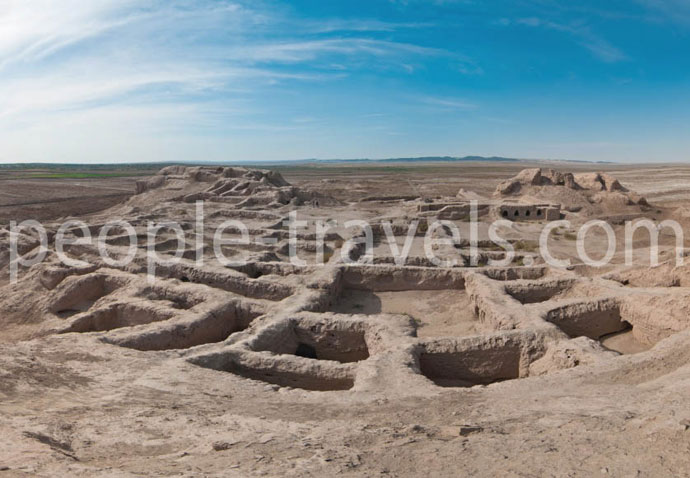 Name of Ellikqala District received from existence of the many castles, centered close to each other. Archaeological excavations give reason to assume that this fortress also served as a center of religious rituals and here was built the Zoroastrian temple.

The fortress stands on a hill, but has remained only some parts of the walls. Here is a beautiful view of the surrounding desert. It can be highlighted the unusual sunset clay wall thickness of ten meters, a variety of well-preserved rooms and halls.

The findings indicate that IV-III century BC Khorezm existed art drawing, music, art, dance, theater arts. Excavations have uncovered the remains of ancient temple 4-3 century BC with a central two-storey circular building (the diameter of 44.4 m, height of about 9.5 m) and a ring of ramparts (7 m thick); Here were found specimens of ancient literature, religious figurines and ceramic funerary sculpture, weapons, ornaments, pottery vessels. In the center of the fortress stood tall rear with lots of rooms, which have been preserved pottery, weapons, ornaments, figurines.

In one of the towers was the entrance to the complex, which includes a round outdoor playground. Its first floor was occupied by two separate groups of rooms. Perhaps complex feces were associated with funeral rites: the lower floor rooms were designed for the burial of the remains of Khorezm king and his wife.

Tuprak Kala fortress is one of the most unique buildings in Central Asia and it is included to the UNESCO World Heritage list.