Petroglyphs of Prisarykamyshya were discovered in 1940 on the sand hills north-western foothills of Kara-Tepe in Karakalpakstan. These petroglyphs are very diverse; many of them have linearly geometric compositions, as well as images of people and the images of fishing nets, boats, hunting scenes. On the walls of caves applied strange images as large and broad lines and furrows. Linear-geometric style images, according to many researchers are so-called hunting and fishing theme of the final phase of the Neolithic era.

Quite a considerable part of petroglyphs of Prisarykamyshya is in the vicinity of the unique landscape of the monument - a narrow and deep canyon, in the depths of which the entire width of the river draining a height of about five meters. Just opposite the drain, in the steep wall chink of Ustyurt, there is an entrance into the vast, carved into the rock cave called Besh deshik, which translated means "The Five holes". 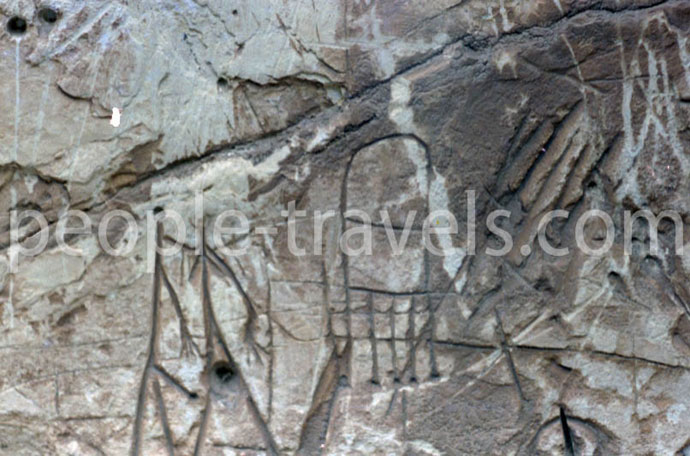 Inside the cave there are a large number on the walls of incised drawings. Basically all of them several scenes - pictures of animals, boats, and astral themes and various solar symbols.

It is interesting to note that the presence of figures united by the composition and performed very carefully searched near waterfalls and weirs in other places, such as in Karelia, Altai, Tuva and Khakassia. 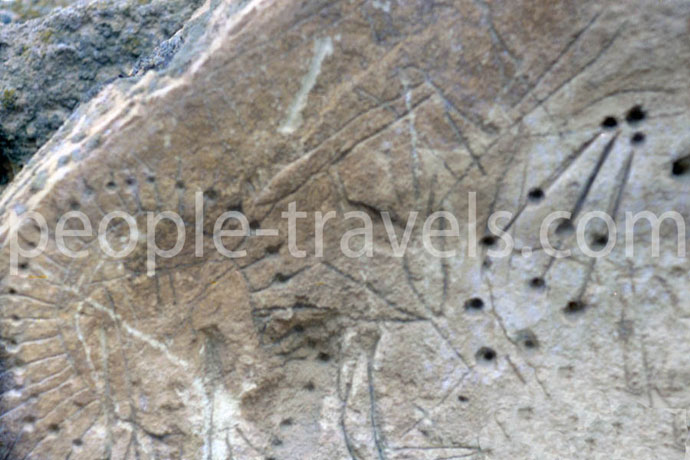 Petroglyphs are found everywhere among subjects with sheep, saiga antelope, goats, horses and camels. And when we try to understand what ancient people portrayed in their compositions or individual figures, then, perhaps, we must first re-create the environment in which he lived into his inner world.

But it would be wrong not to note the fact that the rock paintings are entirely ancient, although the really has not dated. Among the petroglyphs, we found both in the caves and in the rocks, a lot of individual images and compositions relating to the period of early and late middle Ages to the period. Some of them refer to Mongol period. There are paintings, among which there are carved inscriptions in Arabic and Old Persian languages.