Mizdahkan. The necropolis of sacred land

The necropolis of sacred land

The necropolis of ancient sacred Mizdahkan located on the site of a large medieval city of Khorezm, whose life stopped in the XIV century. Nearby are the ruins of the pre-Islamic fortress city, gets the name Gyaur feces.

A special sacred status of Mizdahkan emphasizes local legend, according to which there is the grave of the first man, Adam.

This ancient necropolis extends for 2 km and takes three separate hill together with the surrounding plain. This partition is divided into two parts - Wide necropolis covers two major hills close to laying Xojeli, and the ruins of the walls of the citadel and fortress occupies the top of smaller hill, located to the southwest of the necropolis. 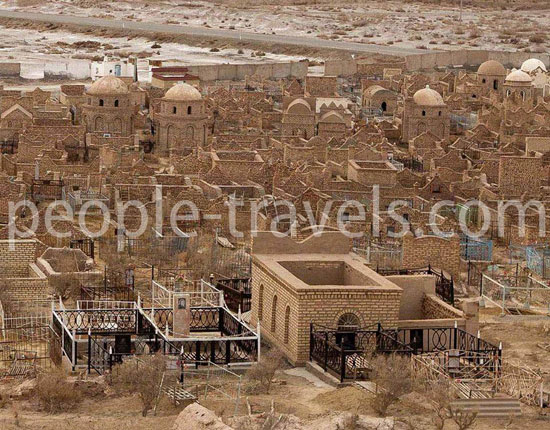 The Citadel and the castle was named Gyaur Kala. From the Arab it means ?Infidels Fort?. Also in Karakalpakstan, there is a second Gyaur Kala, which is located near the Amu Darya and the third one is in Turkmenistan.

Admission to all parts of Mizdahkan is free. The entrance to the necropolis is right by the main road. The whitewashed concrete wall is interrupted by a brick portal with a Cyrillic sign saying "Mizdakhkhan".

A pair of blue doors provides access to a concrete staircase which leads to the top of the hill. Note that the two subterranean tombs open to the public are only unlocked by the caretaker during the daytime.

The citadel is reached a little further on by means of a dirt track forking off from the main road, followed by a short walk. 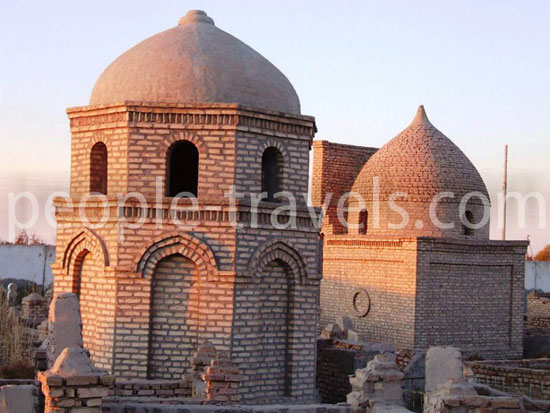 Excavations of the sacred places

For the first time the ancient Mizdahkan was twice briefly examined by Yakubovski in 1928 and 1929. The result of his work was the proof put forward by Bartol?s assumptions about the possibility of localization in the area of the ancient city of Mizdahkan that is often referred to in the medieval Arabic-language literature.

Obtained new data on the topography of the ancient of Mizdahkan, in particular, the city was opened a huge necropolis, and made instrumental survey of individual parts of the monument.

Mizdahkan is a huge range of different age antiquities, which were hidden by various accretions so that their existence and not anticipated.