This fortress refers to monuments of Kangui-Kushan period and was built in the IV-III centuries BC in the tradition of ancient Khorezm. Koi Krylgan Kala fortress is the remnants of an ancient sanctuary and settlement in the Kyzyl Kum desert in To'rtko'l District of Karakalpakstan.

The fortress is different from other castles because it has the shape of a circle. The walls of the fortress constitute 865 m of a circle. Koi Krylgan Kala is surrounded by two walls, and in the middle is located the two-story building of a cylindrical shape. The lower floor consists of a 9-room building, where rooms are covered with two domes.

Between the walls of the central buildings and fortifications were built little room for economic needs, also for living. Archeologists had found here in some rooms ossuaries (bone utensils for the burial of the deceased).

They also suggest that the rooms were built according to astronomical observations. The form of the fortress resembles the sun; it is an indication that ancient Khorezm worshiped the Zoroastrism. Also, there is a hypothesis that in the middle of the fortress was the observatory for the study of celestial bodies.

The archaeological and ethnographic study of Koi Krylgan Kala discovered examples of art of ancient Khorezm. Among them we can highlight the particularly large picture depicting the man's face and head statue carved from stone. 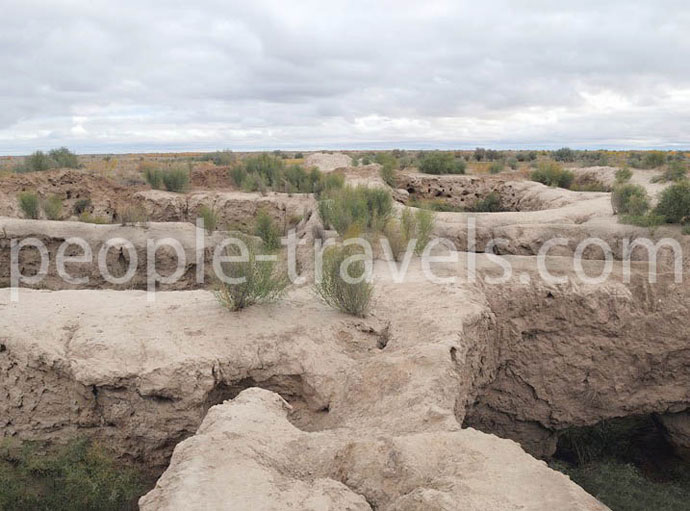 Also in the fortress were found jugs with a handle in the shape of a tiger's head, different dishes in the form of a human mouth, pottery for liquids with drawing horses, different figurines, etc. Among these stands a statue of the fertility goddess Anahita, this is shown in lush robes. In the fortress were found many burial places in the customs of Zoroastrianism. It also should be noted that the fortress was surrounded by a defensive wall with nine towers, located at an equal distance from each other.

Koi Krylgan Kala is a temple where were buried kings of Khorezm state and worshiped the heavenly bodies. And still it preserves the unique inheritance of Khorezm culture and tradition.