The flat top of the western hill of historical and archaeological complex Mizdakhan, that is located near the town of Khodjeyli in Karakalpakstan, dominated by the majestic ruins of the ancient city Guyar  Kala. This construction refers to IV BC. And impressive whopping walls are still encircling the steep slopes of the hill.

Inside the walls can be seen bizarre maze of two strongholds. Above one of them, there are defense towers. Some archaeologists believe that these towers could be not only the fortifications, but also served as religious buildings.

The excavations of another citadel had revealed a large courtyard surrounded by ceremonial, residential and utility buildings, decorated with paintings and carvings on clay. All space settlement furrowed hills that hide ancient buildings.

Russian archeologist Tolstov had been exploring for several decades the ruins of cities and castles of ancient Khorezm, and came to the conclusion that one of the world's oldest religions - Zoroastrianism was born in this region, and here began its spread throughout Asia. Many scientists have joined this opinion, believing that here was written first ghats by Zarathustra - hymns of the holy book "Avesta". Besides, this city was home to the fire-worshipers - adherents of Zoroastrianism. 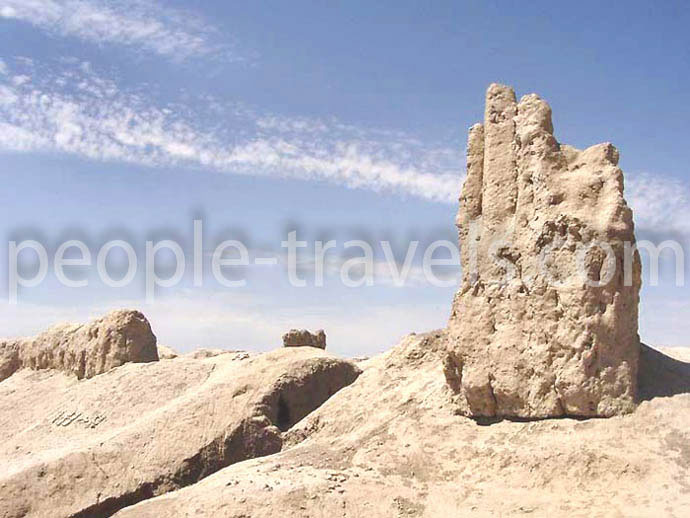 Archaeologists have determined that the cultural layer of Guyar Kala that reaches ten meters and covers the period from the IV century BC to the beginning of the XIII century. Since then a lot had happened. There were city dwellers and the best of times, there have been worse. But such disasters, which have brought hordes of Mongols, one could not imagine. In 1220 soldiers Jochi Khan, son of Genghis Khan, razed the city.

Near in the valley  are traced the plan of city quarters of the XIII-XIV centuries, where after the invasion of the Mongols moved residents of Guyar -Kala, and known among the local population as Shahar-Antakya.

Guyar Kala is the highest hill in the area, from the walls of the citadel surrounding steppe plain seen for tens of kilometers. For eight centuries towering ruins of Guyar Kala have been recalling the times of prosperity of ancient Khorezm.