Thanks to many historical monuments of remote ages Nukus is attracting attention of many scientists and tourists. Here in Karakalpakstan were situated many ancient buildings and temples of three religions such as Islam, Zoroastrism and Buddhism.

Between Urgench and Nukus is located Djanbas Kala, ancient settlement, which flourished in the IV century BC. The main difference Djanbas Kala from other ancient cities is the lack of towers and minarets, which is an indispensable element of the architecture of that time. Now the former greatness of this settlement recalls only by curly walls surrounding the village.

Once on the sandy islands great ancient delta of the Oxus (Amu Darya) in a rich spring waters a valley inhabited by sedentary tribes of primitive fishermen, our ancestors - the creators of bright, unique, distinctive civilization of ancient Khorezm. It was here, about a mile south of Zhanbaskaly existed Neolithic site, which is in the textbooks of archeology called "Djanbas-4." 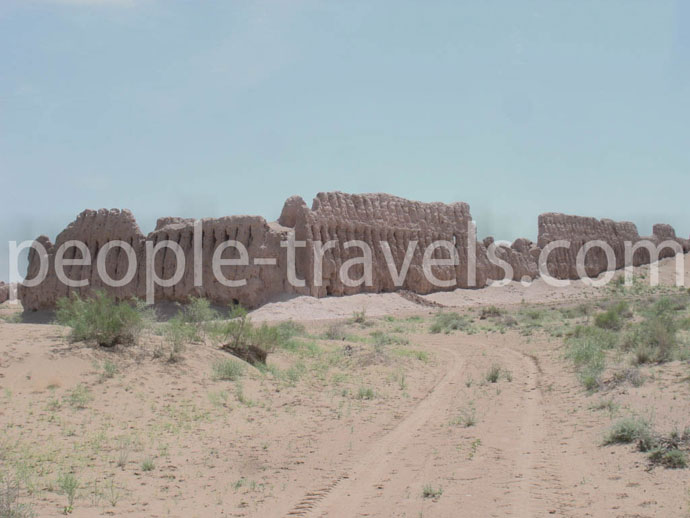 Fortress Djanbas Kala was founded in ancient times and became a part of Khorezm history, when the territory of the region there was "a thousand cities." Ancient fortress has the shape of a rectangle whose dimensions are 200 * 170 meters. To the present day castle is well preserved, largely due to the fact that for centuries its walls were densely covered dunes, as if conserved building.

The height of the walls of the fortress Djanbas Kala reaches about 10 meters, which indicates the great importance and magnitude of the structure. Sure, it was a military facility, and had powerful defensive functions. Feature of the architecture of the fortress is a complete absence of the corner towers. This not only sets it apart from other fortresses of the East, but in general not the case for the eastern architecture. Inside the fortress from the north-west to south-east stretches the main street, on both sides of which were located residential buildings, quarters, divided into smaller rooms.

For several centuries, the fortress Djanbas Kala stood in the way of nomads, reflecting them. But in the first century BC invaders using a battering ram, have managed to break through the wall and get inside. On that stormy battle now show arrowheads found by archaeologists. Most of the residents are likely to perish in battle, many led away into slavery, and since then, for 2000 years the fortress gradually destroyed by rains and winds, and from the former greatness lie in ruins.