Chilpak. The ancient town that lost in time

The ancient town that lost in time

Chilpak is an architectural monument of the ancient Khorezm. It looks like a pancake on a clay sand and rocky hill. Chilpak-kala ("Tower of Silence") was a religious cult center of the Zoroastrians. The design of Chilpak resembles the design of ancient temples of the Sumerians, Romans, Greeks, Indians, where personified the universe.

Chilpak impresses with its size. Round Tower with high walls stands out like a clogged Karakalpakstan Fuji on a hill above the sandy surroundings over the Amu Darya River 43 km south of Nukus.

In terms of shape of the tower it has not closed slightly flattened circle with a diameter of about 65-79 m and walls reach a height of 15 m.

An ancient legend says that Chilpak was once a fortified castle. There lived a princess that was in love with a slave who fled here and from the wrath of his father. Another legend says that this fortress built by Chilpak hero. By building a castle, he dropped the clay from which was formed dakhma. Third, that dakhma is the work of Deva Haji enemy of Ahura Mazda, who led the eternal fight against the forces of light.

Chilpak or "Tower of Silence" was built in the II-IV centuries. Dakhma is a place where the Zoroastrians carried the dead to cleanse the remains of soft tissues. Her fifteen-wall still guard the burial ritual of Zoroastrians. Along the perimeter wall there was located sufa - to cleanse the place where the dead was laid. In order not to pollute water and land degradation, the body was left to be devoured by wild animals, birds of prey and the sun. After purification, the bones were formed in ossuaries, special containers for the remains, and were buried in the ground or in the crypts - Nauset. This method of burial was the most important aspect of belief in Ahura Mazda - the highest purity of thoughts, words and deeds, rigorous belief in the purity of nature. Ossuary samples can be seen at the museum in Nukus.

In the IX-XI centuries locals of Chilpak used as it a signal tower. From the top of the tower offers a beautiful view of the Amu Darya and Turkmenistan. And if you're lucky, you will meet near the foot of it a local resident who plays folk instrument.

The ideal time to visit Chilpak Kala is early morning when the sun is at the zenith, and not burn its hot rays.

Those interested in history and archeology - it is recommended to visit the corroded water and time Dakhma. 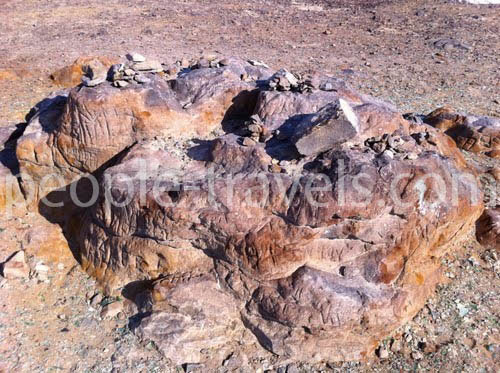