In the last years were carried out the study of cave dwellings in the cliffs of Ustyurt region, saying that there are a large number of artifacts that were unnoticed by the historians and geographers. They are located in the territory of Karakalpakstan and dated back more than 1200 years.

In 1951, after examining one of the caves was found ceramic artifacts dated XII-XIII centuries. Archaeologists made descents in several caves, where was found a vessel and pictures on the walls. 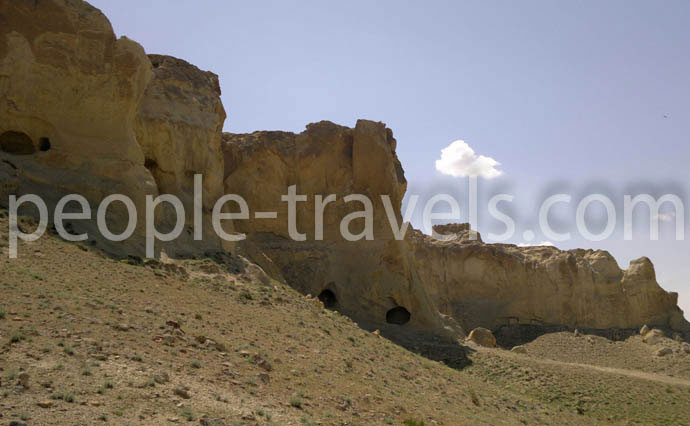 During the first expedition conducted a gradual accumulation of plans and descriptions of caves in all three escarpments. The last three expeditions conducted detailing studies, refinement of individual data, careful consideration of all the caves and rock paintings, as well as clarification of certain patterns.

At the bottom of the hill almost everywhere there is a powerful talus, consisting of fragments of rocks that form the larvae, and the products of its destruction.

The presence of five cave cities with very substantial size requires explanation, especially since it is not reflected in any of the ancient chronicles, nor in modern studies and descriptions.

Now examined more than 200 caves, however a large number of them were destroyed due to the powerful ceiling collapses and dumped rocks. These caves are cut in a layer of marl capacity of 1.3-1.5 meters, and sometimes they arranged in two tiers, and the difference in height between the floors of caves reaches 5 meters.

In conclusion, cave cities of Ustyurt escarpment are of great importance for modern archeologists, especially detailed examination of all cave dwellings, as well as their detailed description and drawing of topographical plans, a detailed analysis of all the features and discoveries of the ancient irrigation system of the area.