According to the Institute of Archaeology of the Academy of Sciences of Uzbekistan, in the past year, in Andijan region was discovered a previously unknown settlement Koshtepa.

Scientists suggest that this unexplored territory fraught with unique information. According to them, the ancient monument occupies almost one hectare and consists of two hills with the height of 4-7 meters. Presumably it is the central part of the village with the length of a few hectares, which was surrounded by walls, performing defensive functions. 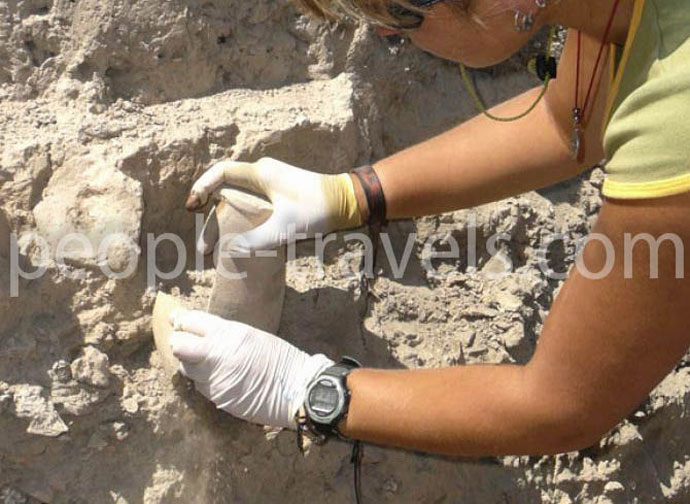 Archaeological research conducted on an area of 60 square meters, and the depth of the excavation reached two meters. The top cultural layer of Koshtepa identified the platform with the height of 1-1.2 meters, consisting mainly of clay, gravel and partly adobe bricks.

Over the centuries, due to moisture, wind and solar, wall structures have been destroyed, it did not survive to the present day. Despite of this, archaeologists managed to find the platform surface pits for storage of grain and other products of 1-1.4 m in diameter. The number of them is pushing the idea that it is possible that these granaries contained a provision for the entire settlement.

Along with this, in the northern part of the study area was found the remains of the wall with the length of 5 meters. Research discovery allow definitely suggest that this massive structure was used in the final stages of the ancient state of Davan, i.e. in III-V centuries.

The excavations also managed to find a clay utensils, dating from the last period of existence of Koshtepa (VII-VIII century BC).