The masterpiece of the national heritage

In the ancient city of Andijan, as well as in other Asian cities, there are several main medieval buildings. One of them is a complex Jami that had survived to our time and become a main attraction of this city.

During its long history, the city has been destroyed many times by strong earthquakes and therefore few ancient buildings had survived. Among the buildings that sustained the disaster there is most popular architectural complex of Andijan – complex Jami.

This complex was built by the most powerful ruler of Kokand khanate. Having ascended to the throne in 1845, Khudoyar was deprived of power four times because of internecine strife, but every time he returned it again. 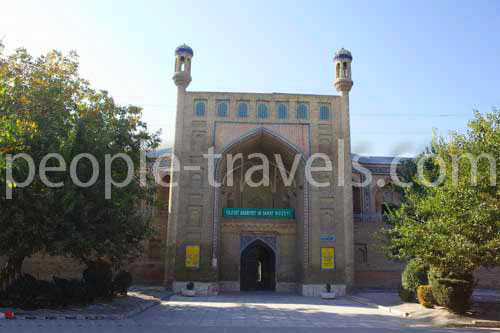 The complex covers an area of about 1.5 ha. It is called "the pearl of medieval art in Andijan." The ensemble of the complex consists of several buildings (madrasahs, tombs and other). It began to take shape at the end of the XIX century (1883-1890).

First, the building was shaped like the letter T with a courtyard, but the north wing and south wing were not preserved. Length of the building is 123 m; corners placed classrooms between them - the rooms of students. In the decoration used a unique carving, domes and portal has an ornament of mosaics. 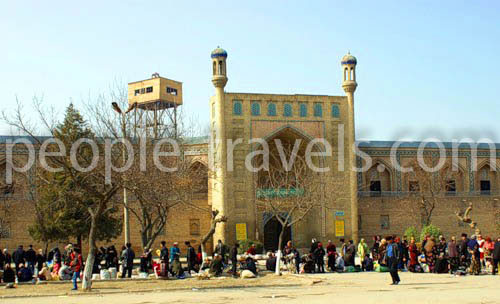 Jami Mosque has enormous size; its main facade is about 26 arched spans. Wooden columns decorated with carved ceiling that is painted with bright patterns, which combines floral and geometric elements. The minaret of the mosque is the highest in all Ferghana Valley and reaches 32 m.

Minaret is built on the basis of 8 Octagonal, it served as the material for bricks. On each of the facades there is a lined niche of lancet shape with an ornament in the form of a medallion. In this medallion is inscribed in Arabic script the text of the Quran. Geometric masonry is only in the middle part of the minaret. The top of the ring is lined with blue tiles. The vertical axis is the spiral staircase. Minaret is crowned by a dome lamp. Before minaret arranged artificial lake, around there are several fruit trees. In 1902 in Andijan, there was a strong destructive earthquake, but the complex was not affected.