The most mysterious monument of Bukhara

One of the most important monuments of Bukhara is Zindan of Emir that attracts people with its mystery.

This one of the most enigmatic monuments of Bukhara was built in the 18th century. "Zindan" in Persian means "prison", "prison", "well for the detention." The prison was built in the northwest corner of Shahristan and consisted of several chambers of debt, the cooler and dungeon, laid of brick with a diameter of about 5 meters and a depth of 6.5 meters.

This place used to keep dangerous criminals. Zindan is a pit, which is located under the ground, it is in Shakhristan. The prison contained not more than 40 people; you can understand that in the city of Bukhara, as it is now a very low level of crime. 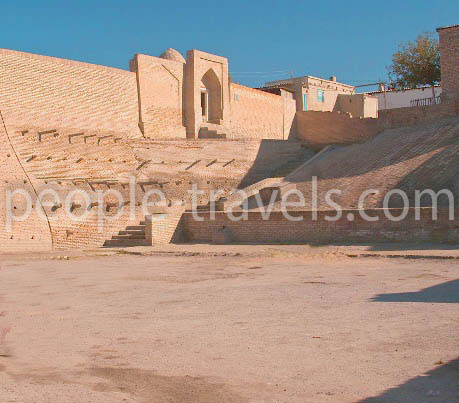 Pit located at a depth of 6.5 meters below the ground, the diameter of circle is 5 meters. If you go down to the dungeon, you can understand what sensations experienced criminals are in Zindan that is not a pleasant feeling.

Ancient Bukhara lived under Sharia law, and the slightest infraction could lead to punishment, it can be understood on the documents that have reached us. Criminals who were in Zindan were either debtors or violators of the rules of the main religion.

At that time, there were special officials who checked the presence of people in the prayers. They were called Rais and darradast. In that case, if the citizen did not show up for prayer, he was required to submit a valid reason for Rais, otherwise he was severely punished. If the same citizen, repeated violation twice, as a consequence, he had to deal with Darradast who could flog him with whips, or worse put in prison.

Imprisoned person could only be a last resort, since no one knew whether he will go on the right path after a stay in Zindan, or vice versa to turn into the worst offender.

For the attempted murder, murder or theft - it is included in the punishment imprisonment. After the fall of Bukhara Emirate, in 1920, the Emir dungeon ceased to operate for the intended purpose.

At this point, Zindan became a museum, where locals and visitors Uzbekistan tourists can not only look at the proceedings of the time, but also to go as prisoners. So your visit to Uzbekistan will be full of adventures and wonders.