Ancient city of Vardanzi. Oriental spirit of the Early Medieval

Oriental spirit of the Early Medieval

Vardanzi is an ancient and medieval town located in the Bukhara oasis, 40 km north-east of Bukhara. Now there is reserve in Shafirkan fog Bukhara region.

At the time, Vardanzi was large and well-known city, but due to the translational motion of sand, in the XIX century it was bombarded by them and became uninhabitable.

Vardanzi ruled by the dynasty of kings who bore the title of Vartan-khudat. The city in those days was of great strategic, industrial and commercial importance. It was a border crossing point with the nomads. The Arabs, led by Kuteib ibn Muslim in the years 708-709, and finally conquered Romitan possession Vartan-haudatov. 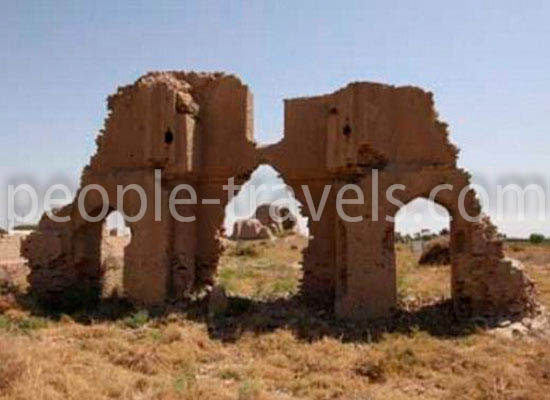 Ancient town and its legends

According to legend, this town was built by the Sassanian prince who had moved to Bukhara and received from her ruler the land for more than two thousand years ago. Construction of a canal in the area made Persian prince Shapur popular. The name of the channel - Shapurkam - save the name of the legendary prince.

Sassanid dynasty was an epoch in the history of Persia. When they finally took shape in Zoroastrianism slim spiritual-philosophical doctrine, and the Persian forces successfully repelled the attack Rome. In one of the battles Shaheen Shah Shapur I captured the Roman Emperor Valerian (III century BC).

Masters of the Sassanian era brought from a state of the art of Persia archaic hieratic static - their reliefs and stamped products such as racing horses, flying fringe clothes, riders and hunters at full gallop hit the target from the bow.

An important role in this artistic revolution has played Silk Road, which linked the country, the people, traditions and culture.

The Great Silk Road conveyed to the Persian cities at the same time, the dynamics of the nomadic way of life, and free-thinking Soghdians, above all valued the open-mindedness and tolerance of opinions. To visit Uzbekistan cities is good choice for traveling.

The picturesque landscapes that can bewitch any visitor

In 1975 there was formed the reserve. Its purpose is mainly is to preserve the ruins of the once-existing Vardanzi, now buried sand and landings haloxylon. The reserve is located 50 km east from Bukhara, in the heart of a flourishing oasis in the endless cotton fields and vineyards. The center of the reserve is the high clay hill - the ruins of a fortified castle.

Despite the small size, the nature reserve is of great scientific value as an area reclaimed from the desert by hard work. Of great interest here are treelike forms haloxylon black, unique in size. Here grow Kandy Cherkez Richter, tamarisk. In the forest are common hares, foxes and jackals.