In medieval Bukhara in the silhouette of the city minarets played an important role. For architectural silhouette Bukhara especially Vabkent minaret, visible from a distance of tens of kilometers, when the city walls still buried in suburban gardens.

Art Bukhara engineers, builders and ganch carvers were spiritualized by romantic spirit of oriental poetry. Precisely because of their inspiration, Old Bukhara has a number of high towers and minarets, which are a kind of ornament of all the architectural heritage of the city.

This minaret is one of the daintiest monumental buildings of Uzbekistan architecture. Date of commencement of construction is XII century according to the Kufic inscriptions that can be read in the lower tier of the decorative, herpes trunk minaret. 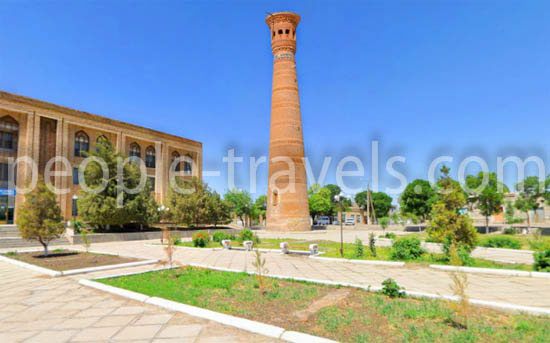 Round tower, extended downward, with a spiral staircase that leads to the site of the rotunda - skylight, based on projecting masonry series, issued in the form of the cornice - Sharaf. The erection of such structures requires exceptional skill of the builders.

It was necessary to take into account many factors: the strength of the wind and seismic tremors, soil properties, etc. This minaret is one of the significant one among preserved in Central Asia in its scale, design and artistic merit of minarets, (with height of about 47 m), which served as an example to follow in the construction of almost all subsequent mosque Bukhara oasis.

Vabkent Minaret is the earliest imitation of Kalyan Minaret and was built 70 years later. However, it also has a unique design and characteristics that differ from other building of Bukhara. When you visit Uzbekistan you will love this country and want to come one more time.