Ustrushana was a state in Central Asia, located on the present territory of Bukhara region and existed in VII century. This country was divided into 18 regions, each of which had a large number of castles.

Thanks to its advantageous location it was one of the most important branches of the Great Silk Road and therefore the state played an important role in political and economic life of the majestic Maverannahr. So, here are well developed industries such as craft and metallurgy, as well as a high level of culture and trade.

On the territory of the Ustrushan State lived tribes related to the Sogdians, but they had their own alphabet, which differed sharply from Sogdian. The most common religion here was Zoroastrianism. At that time, only in North Ustrashana, now part of the Syrdarya region, were about 159 historical monuments, among which various settlements, burial structures (mounds) and sardobas (with caravanserais). 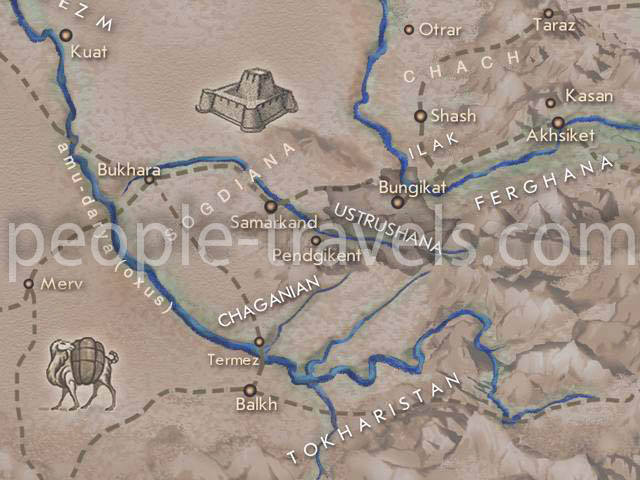 The most famous mounds were as follows Kultepa, Koshtepa, Eski Hast and Kattakyrtepa. And the ancient settlement here differed from each other, for example, by planning or external signs. The major settlements of the citadel were Dzhindykurgan and Mykkurgan that were mainly located on the high hills or mountains along the caravan routes.

In addition, in the territory of Syrdarya region were found the remains of 12 ustrushanskih mound, detached from each other. Their size diameters ranged from 6 to 90 meters and height - from 1 to 12 meters. Thus, the largest of which was Ulkan-Saylyksky mound, which was located near Gulistan.

Ustrushan state was tried to capture many times by different tribes and conquerors, among which the most persistent were the Arabs, who more than once attacked Ustrushan state trying to spread their religion here - islam.

In the end, Ustrushan state was placed in the hands of Yahya ibn al-Assad kind Samanids. Thus, in 893, this strong, rapidly developing country as an independent state ceased to exist and it was included in the Samanid state. You can visit this place and many others if you order tour to Uzbekistan from Peopletravel