Ulugbek Madrasah in Bukhara is one of the earliest buildings, which was constructed by the donation of Ulugbek (1394 - 1449 gg.). It was completed in 1417 and it was not known before the opening of Ulugbek madrasah in Samarkand.

Ulugbek, according to historian Al- Abdurazzakov Samarkand, visited his madrassa in the month of Dhu al- ka'da (November 1419) at a trip to Bukhara. Here he wrote about the author said: "Shahzad Ulugbek was pleased to visit the madrasah, located within the city of Bukhara and constructed due to its exceptional generosity."

Ulugbek Madrasah was repaired several times. The first repair was made on the order of Ubaidullah Khan (1533 -1539 years). During the reign of Khan and his son Abdulaziz (1539 - 1549) in the Ulugbek Madrasah were taught eminent scholars, poets, calligraphers.

After a while, in 1586, here was made even one repair, and several inscriptions kept archival document about this restoration of the madrasah fragments. Around the end of XIX - early XX centuries the madrasah was redecorated during the reign of Bukhara khalifat.

In 1994, for the anniversary of Ulugbek madrasah were performed on the following work: restored main portal group with Arabic inscription on the portal, harness majolica, partly restored galleries of the first and second floors, courtyard and blind area within the perimeter of the yard, landscaped grounds with lowering of the surface before the main portal. 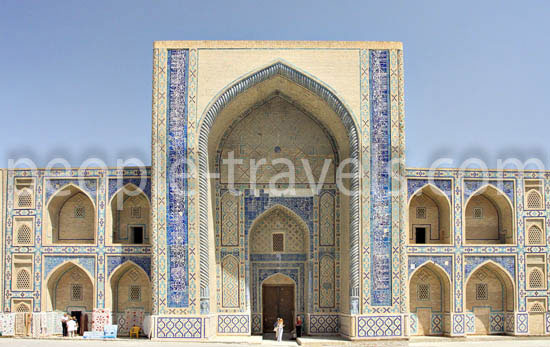 Near the middle column under the dome there is a miniature cauldron made of calcium carbonate (limestone). Sometime later, after pouring the water into the boiler, the water comes to a warm state. The secret of this miracle then knew only limited, some of the attendants of the madrasah. Make a visit to Uzbekistan and enjoy beautiful architecture!

This measure is carried out to bring in the surprise of Muslim believers, was intended to strengthen the position of Islam among the masses.

According to the scientist, archaeologist, and historian Yahya Gulyamova - "some of these columns of madrasah preserve the most ancient types of inscription of art of the wood carving throughout Uzbekistan."