The Shrine is located in the village of Sohar (25 km north of Bukhara). Historical evidence notes the grave spiritual authority of Sufi school of the famous scientist - mystic Hodzhagana Amir Kula (c. 1281-1370).

He was a disciple of Muhammad Baba Sammasi (d. 1354). Amir Kulal had more than a hundred students, of which the most famous was Bahauddin (Baha ' al-Din) Naqshband.

According to one of the Lives (Maqamat-Amir Kulal), as well as the apocryphal writings "Malfuzat-i/Tuzukat-i Temur Amir Temur blessed him and predicted a great future. Such a representation of the holy, and especially thank to his student Bahauddin Naqshband, largely contributed to the burial place of popularity Amir Kula.

Nevertheless, over his tomb was not built any significant building during the Soviet era, this place was abandoned. Mosque beginning of XIX century was completely destroyed.

In the first years of independence at the initiative of some believers of Kagan and foreign followers Naqshbandiy - Mudzhaddidiya near the burial place of Amir Kula nondescript tomb was erected. With the exact burial place of the saint has not been determined. For this reason, in 2008 at the initiative of the President of Uzbekistan Islam Karimov, the burial place was exactly identified and the territory around 6 hectares was built cult memorial. Also PeopleTravel Company offers you more Uzbekistan Tours. 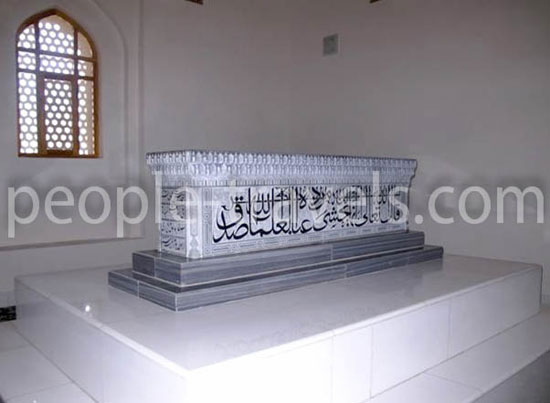 Over the grave was erected scientist two-domed tomb. The main burial chamber decorated with Kufic inscriptions, and the second room is decorated with figured work, creates a whimsical play of light and shadow.

At the same time were erected gates, mosque, rooms for pilgrims for ritual purification, octagonal pond minaret 10,5 m was around a garden with paths lined with polished brick and marble stairways . Wooden door leafs were carved by Bukhara masters.