Poi-Kalyan Ensemble in Bukhara, which has an inimitable silhouette, is located on the front square Registan and it is the nodal architectural complex of the town. Poi-Kalyan is translated as “pedestal of the great”, and it is implied, that the square with the ensemble lies at the foot of Big Bukhara minaret – Kalyan. The buildings of Poi-Kalyan Ensemble were established in various times, but despite the all, the complex Poi-Kalyan looks perfectly and harmoniously; and serves as one of the best models of the Persian architecture.

Poi-Kalyan can be also called as the exemplary ensemble of public and religious purpose. The construction of Poi-Kalyan Ensemble especially raised the aim of ideological influence of the architectural buildings.

The architectural complex Poi-Kalyan consists of three buildings, erected in the XII – XVI centuries. They are Kalyan Minaret, Kalyan Mosque and Madrasah Mir-Arab. The constructions form the integral ensemble, which plays the most significant and grandiose role in Bukhara architecture.

Kalyan Minaret was constructed in 1127 by the Karakhanid governor Arslan-khan. The height of the minaret is 47 meters. Its ornamental strips are decorated with blue tiles. It is considered that it was the first usage of the ceramic, which occurred everywhere in Central Asia. 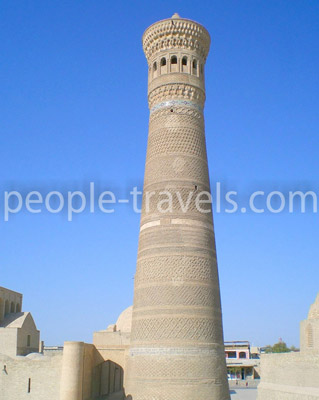 Kalyan Minaret has another name “Tower of death”, because convicts were fell down from it. And these actions were stopped just in the beginning of the 20 century.

The architectural complex Poi-Kalyan is attractive for all guests, because Kalyan Minaret is seen from any place of the town.

Kalyan Mosque, built in the 16 century, is the second in size mosque in Central Asia after Bibi-Khanim mosque in Samarkand. It is firmly convinced, that during holiday religious service Kalyan Mosque could seat till 10 thousand of people. And everybody could hear every word of the preacher. 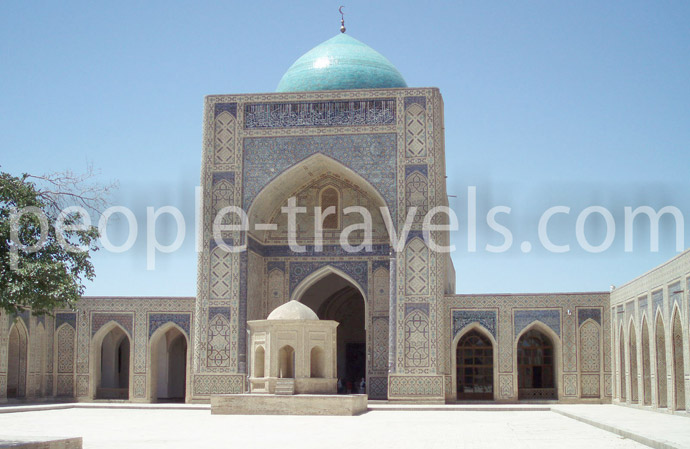 The big open yard of the mosque, its majestic portals and balconies make the indelible impression.

Mir-Arab Madrasah was always the example, thanks to its balanced proportions and symmetry. The building of Mir-Arab Madrasah is usually ascribed to sheikh Abdallah Iamani, who was the spiritual leader of early Sheybanids.

The architectural complex Poi-Kalyan is the popular center of pilgrimage, which is attractive not only by its ancient history, but inner and outside decoration. With Peopletravel Company you are able to visit Poi-Kalyan ensemble to see its beauty and make fantastic photos of Poi-Kalyan, which will remind of travelling around Uzbekistan.