The uniqueness of the history

Traveling to Uzbekistan you must visit Nadir Divanbegi madrasah. It was constructed in XVII and it is situated in the eastern part of the Lyabi Haus complex.

This unique architectural building was built in 1622-23 years by Imamkuli Khan Nadir Divanbegi as a caravan-serai, but later it was converted into a madrasah. After the construction it logically completed the ensemble Labi - Hauz.

In accordance with the legend, Nadir Devanbegi planned to open a caravanserai and earn well as while in the square Labi -Hauz conducted a brisk trade, and from the guests would not be rebound. 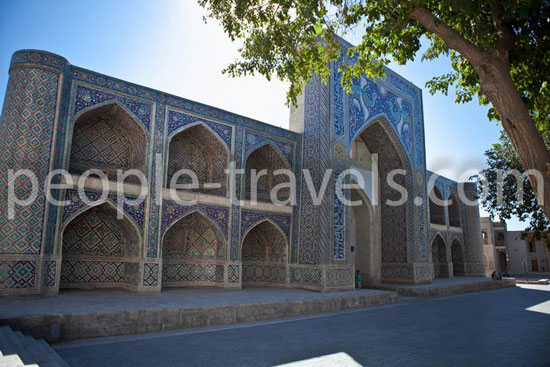 As a result Nadir Divanbegi changed his plans and gave the building to believers; it was opposite khanaka built the same hapless Divanbegi. This legend explains the scarcity of some outhouse architecture. Therefore the main facade was combined with the recessed balcony.

However, it was not in vain and Nadir earned the fame great patron and protector of Islam. Its construction is very similar to the nearby khanaka. It has rectangular portal and two rows are turrets guldasta. Angles elongated along the longitudinal axis of the courtyard cut and decorated pentagonal niches. Those that are adjacent to the eastern range of facilities are in each face the doorway.

Niches, located on the west side - the deaf, because for them there is no space. Pentagonal niches madrasah adjoined side room’s, here was also consructed decorative niches without angular spaces. 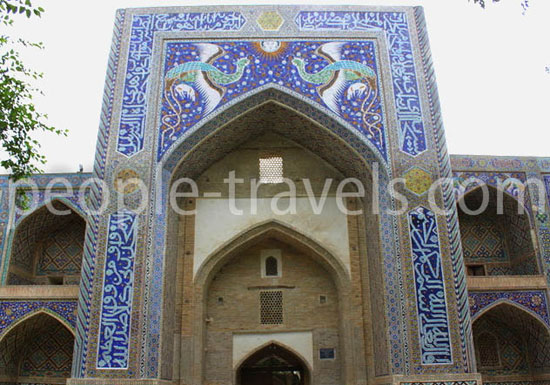 In tambourines parts arches there is two watching the sun birds Semurg symbolizing happiness. It is also ought to be reminded about the heat in this city during summer, which is almost always worth in Central Asia.

Therefore in decoration are dominated two cool colors – bluish and greenish. Portal is decorated with the inscription, which translated into Russian reads as follows: "Allah is great, Muhammad is his prophet."

It is interesting that in the XIX the inhabitants of Bukhara thought that Nadir Divanbegi served for Catherine II, and madrasah were built with funds generously contributed by Empress.

In 1993, this sightseeing along with other monuments of the historic center of Bukhara was included to the UNESCO World Heritage List.