Kukeldash madrasah enters into the composition of the architectural complex Lyabi-Hauz. The madrasah was built in 1569 on Abdullah Khan's initiative. The constructed madrasah became the symbol of strong state during the governing of Abdullah Khan II.

“Kukeldash” literally means “foster brother”. In hierarchy of the power, inherited from Genghis Khan the word “kukeldash” marked one of the more important court positions. The organizer of Kukeldash madrasah was the authoritative Emir named Kulbaba. He was keeping his post of kukeldash for the period of several khans of Shaybanid Dynasty. Emir Kulbaba Kukeldash facilitated Abdullah Khan II during his rise to power. According to the sacred tradition of the election of the Khan, each new Khan was raised on the canvas of white skin. Only four most influential people in the society could pull the cloth. Emir Kulbaba was among those who enthroned Abdullah Khan.

Kukeldash madrasah in Bukhara is the biggest madrasah. Its size is 80 x 60 meters. Kukeldash madrasah was erected in compliance with traditional scheme of Central Asian boarding school. The madrasah has 160 khudjras (cells), located in two stores on perimeter of two iwans (arched room) yard. The traditional facades of the madrasah are adorned with majolica. 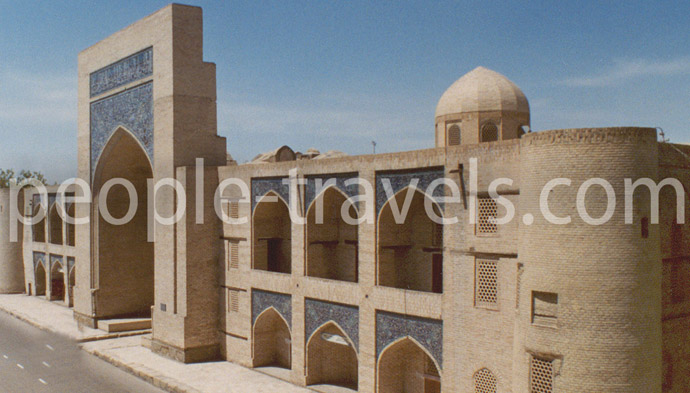 The main facade of Kukeldash madrasah is turned to Lyabi-Hauz pool – artificial pond, round of which the architectural monuments are placed. The facade has a hall, mosque and darskhana (room for classes). The interior of the madrasah is interesting for its diversity of compound star-shaped plafonds made of baked bricks or ganch (mix of clay and gypsum). Kukeldash madrasah inside seems to be cramped, because it is piled with paths, ladders and nooks. But the decor in two halls remained in a good view. The dome overlap of the paths, which lead from gates to the yard of the madrasah is impressing. The hall-door is one of the masterpieces of Bukhara wood carving. The leafs of the door are covered with ten-rays star-shaped girih (set of five tiles used for decoration buildings in the Islamic architecture) with filigree ornament in fillings.

It is certainly known that in Kukeldash madrasah in the late XIX century a prominent Central Asian writer Sadriddin Ayni studied.

Over its history, Kukeldash madrasah performed many different roles: it served as a caravanserai and defensive fortress, and even the place of execution. Today in one section of the madrasah there is a museum dedicated to writers Sadriddin Ayni and Jalol Ikromi. The other part is the art-restaurant where you can taste the delicious Uzbek cuisine.

The construction of Kukeldash madrasah first of all is the expression of Bukhara style, restrained nobility and the synthesis of architectural forms. Having booked tours to Uzbekistan and planned your trip to Bukhara with the assistance of Peopletravel Company, you will see with your own eyes the beauty of the monument.