The part of world heritage

Khalif Hudoydod complex belongs to the historical monuments of XVIII century. This complex is located in the center of old town of Bukhara. Population attributes construction of khanaka to Khalif Hudoydod, who was buried in a nearby cemetery Eshoni Imlo.

According to legend, Khalif Hudoydod lived more than 200 years ago. Many people argued that Hudoydod came to Bukhara from Urgench. It is possible that he was the same person as Sheikh Hudoyberdi, whose biography titled "Lutfi buzurg" known in many manuscripts.

This complex consists of mosque, madrasah and minaeet that are located near each other. The construction of this complex lasted for more than 5 years that is why the architectures of the building keeps the unique medieval style of religious construction with the inscription from Quran. 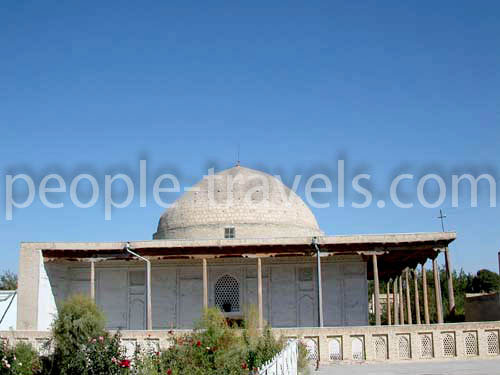 In accordance with this source, Hudoyberdi came from Balkh area. Six year old child was brought to Bukhara, where the ruler was Muhammad Rahim Mangit (1753-1758) at that time.

Hudoyberdi has a great respect at Bukhara rulers and died at a ripe old age in 1841. Biography of Hudoyberdi wrote his son in 1842-43. Biographical data largely attributes him to the part of the folk tales.

Khanaka that is a part of the complex is a constructive type mosque, which served as a place where on Fridays were held loud religious ceremonies as "dhikr". Here in khanaka there was a hostel for the blind - Quran reciters.

The interior is illuminated through holes arranged under the domes. According to the requirements of XVII century all religious building ought to have inscriptions from Quran on walls. Come and enjoy your trip in Uzbekistan.