From historical and architectural point of view Kalyan Mosque is the main place in the town. Kalyan Mosque, composing Poi-Kalyan Ensemble is the central mosque of holy Bukhara. Towns people of Bukhara always were in deed of a big and functional mosque on this place. That is why it was reconstructed, and completed again and again. And if any battle or natural calamity destroyed the mosque, another mosque was newly built.

The history of Kalyan Mosque became a thing of the past. In a present-day view Kalyan Mosque was built in the very beginning of the XVI century during the governing board of first Sheybanids. Since that time for several centuries it has been acting as the main mosque of Bukhara. Kalyan Mosque took a place of old Karakhanid mosque of the XII century, which was erected simultaneously with Kalyan Minaret. The scale of this Sheybanid mosque is comparable with Timurid mosques in Samarkand and Herat. Kalyan Mosque in Bukhara yields to Bibi Khanum Mosque in Samarkand, but having size of 130x80 meters, exceeds it in area. 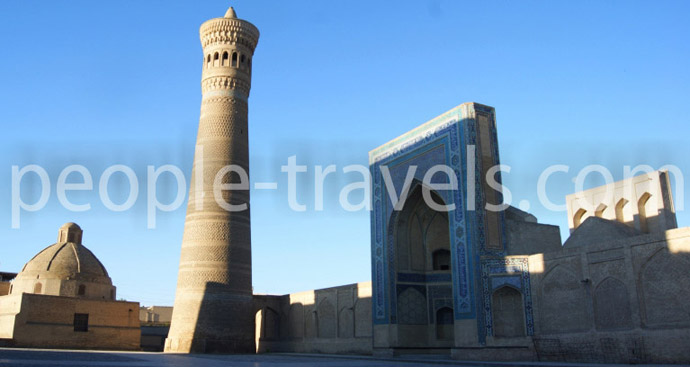 Kalyan Mosque has a traditional right-angled plan with four iwans (arched room). The entrance iwan is adorned with the outer portal, which is faced to the square Poi-Kalon, as well as inner portal, which is faced to the yard. Along the perimeter of the yard there are covered arched galleries with 288 domes. 208 pillars are the base stand of the domes. On the center pin near the inner portal of the mosque the octahedral booth, which serves as the cathedra, is situated.

The colour facing is made of mosaic and bricks, covered with glaze. Kalyan Mosque is the most ancient mosque in Central Asia. The construction works were begun in the 15 century, and was stopped in the year 1514. The central entrance of the mosque is from the side of Kalyan Minaret. The entrance is decorated with mosaic and covered with colour glaze too. One can also see the extant name of the builder – Bayazida al Purani on the ornament of the mosaic. The portal of the mosque is on the pedestal. 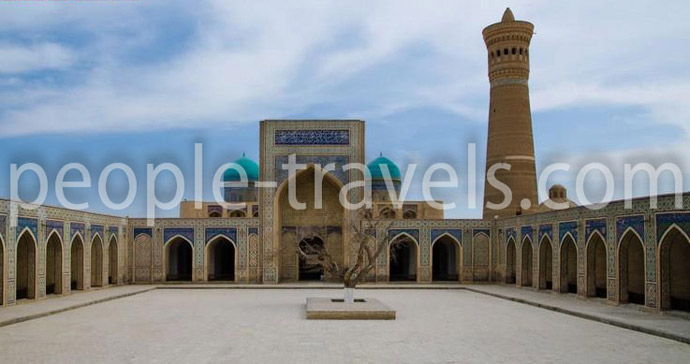 Kalyan Mosque seats up to 12000 thousand of people. Today Kalyan Mosque in Bukhara is the central mosque of the town, in which the faithful pray on Fridays and feast days.

Kalyan Mosque in Uzbekistan is the wonderful example of medieval mosque of Iranian type. Its architectural engineering has the dynamic directing to the Kaaba. The total acting of all applied architectural hooks makes the onlooker feel a certain impulse to the center of the Islamic world. In this, of course, is seen the skill of Islamic architects who created the unmistakable expressive, aesthetically pleasing architectural forms. 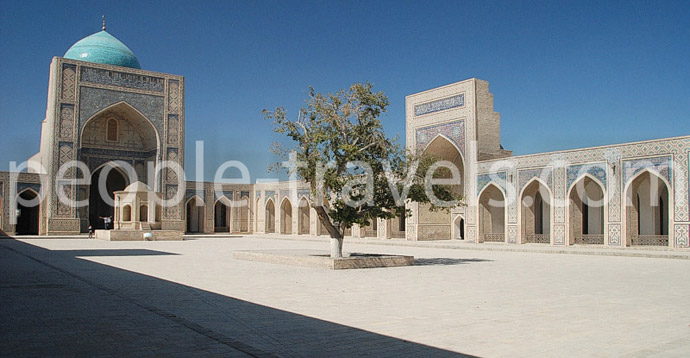 Today numerous tourists and travelers can visit Kalyan Mosque and see its beauty and grandiosity. And you also have a great chance to choose a tour to Uzbekistan among list of tours introduced below and visit this amazing mosque, as well as make fine pictures of Kalyan Mosque.