The main silhouette of Bukhara

Kalyan Minaret is one of the tallest buildings in Bukhara, its height is 46.5 m, and a fundamental part of all its leaves to a depth of 10 m with a diameter at the base of 9 m. Powerful tapered thinning ends up with massive pillar lantern cylindrical rotunda on stalactite crown. You can visit this place whitin Uzbekistan tours.

Kalyan Minaret is located in eastern part of Bukhara and the history of its construction referred to the XI century. This monument originally served for the purpose of call for Muslim prayers. However later, this high minaret became an observation post, from which followed the appearance of the enemy and also served as a kind of beacon for trade caravans. 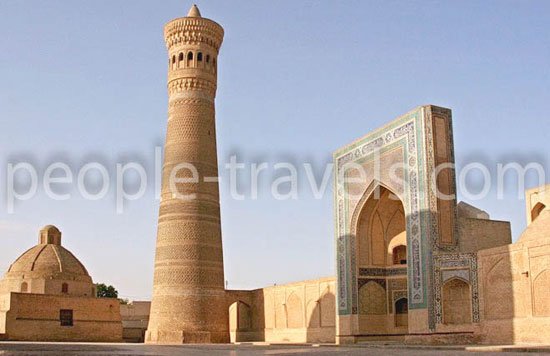 During the reign of Bukhara ruler of the Mangits Board it served as a place of public punishment where from top of minaret thrown down on a stone. That is why later this place became notorious as Tower of Death.

Minaret is a sloping pole, built of baked bricks where inside you will find the spiral staircase, leading to the site of rotunda - skylight, based on projecting rows of masonry, decorated in the form of magnificent stalactites. Currently minaret released from the layers of soil in the basement with a depth of 10 meters.

Lantern has 16 cross- arched openings over which launched crowning stalactite cornice. On the ledge there is an inscription on its construction in 1127, and mentioned the name of the architect - Bako. 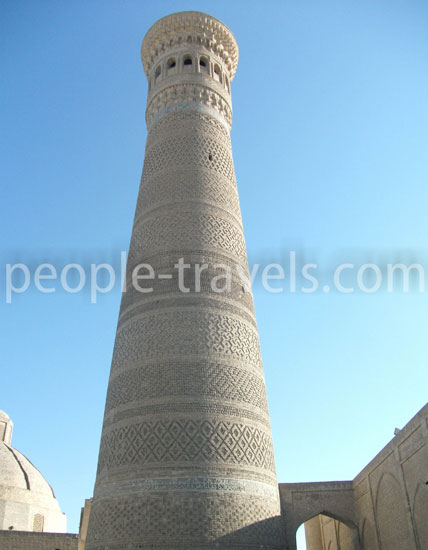 The entire minaret has 12 zones, each of which has its own unique pattern. Now some fragments of the minarets are stored in the branch of Bukhara History Museum.

The silhouette of Bukhara the Kalyan Minaret occupies a large place. It plays the role of the dominant monument of the city. Minaret Kalyan bridged junction with the roof mosque Kalyan, where you can get upstairs through the rotunda of the narrow and steep brick spiral staircase with 105 steps.

There is a great deal of legends about Kalyan Minaret. One old story narrates about a shakh and his wife. The shakh was a merciless man. Once he decided to push his wife off the minaret. But the wife was clever, and she asked her husband to fulfill her wish. He agreed. On that terrible day of wife’s execution, she put on all her dresses and skirts.

Being absolutely calm, the wise woman went up the stairs to the tower. When she jumped it seemed a miracle. The woman survived because her clothes blew up like a parachute, which carefully pulled her down the earth.

One more legend is about Genghis Khan. When the commander captured Bukhara, he entered the square and looked up the minaret The helmet fell from his head. Genghis Khan had to bend to pick it up. Then the powerful fighter uttered the following phrase “I had never bow, but this structure is so majestic and worth a bow”.

Discover this unique monument of the Bukhara as a symbol of past centuries.