In 1598 – 1599 in the north-eastern part of the centre of Bukhara the mosque Fayzabad Khanqah was built. The mosque was constructed as the shelter for itinerants round holy places of dervishes-monks.

Khanqah is a type of buildings, which were widely spread in Bukhara in the XVI century. The erecting of Fayzabad Khanqah dates from that times. Khanqah is a mosque, where near the main hall, in which Friday prayers are read and every-day five-fold namaz is carried out, there are rooms, something like cells for monks. 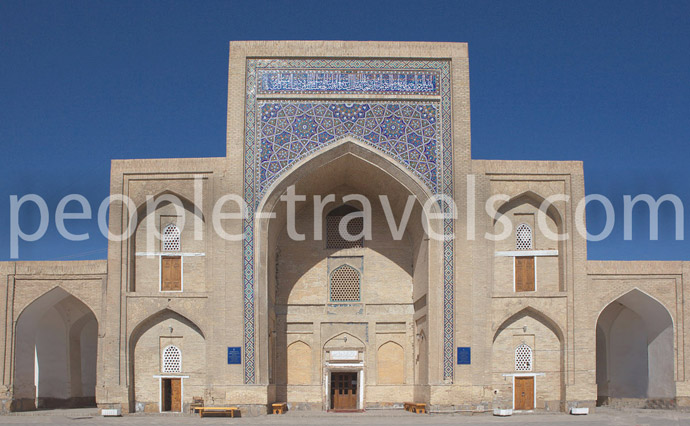 Fayzabad Khanqah in Bukhara was built by the famous Sufi Mavlono Poyand – Mukhammad Akhsi Fayzobodi, who died in 1601. He was the founder of the Sufi center, known as Fayzabad. The generation of ishans Shokhi Akhsi had been existing in Bukhara till the establishment of Soviet power. Once the building was called “Shokhi Akhsi”, but later the mosque was renamed in honor of the Sufi.

The mosque is a great example of the architecture of the XVI century, where the symmetry and precise proportions are stood up in everything.

A big hall of Khanqah is crowned with the dome. Along the peripheral sides of the hall khudjras (cells) are situated. The khudjras are decorated as onestoried cupola galleries. Such khudjras are located in the corners of pylons of the main hall and behind the mihrab (niche in the wall of the mosque facing to Mecca). 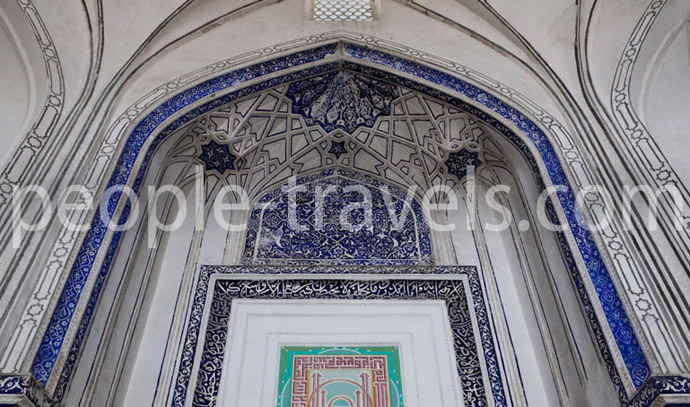 The architecture of the building is fully filled with refinemen, beauty and simplicity. The height of the building is growing from low wings of the gallery up to the entrance portal. Thanks to through galleries Fayzabad Khanqah seems to be ornate and light. In the magnificent and refined interior of Khanqah white patterns are prevail. The main cupola inside the mosque is decorated with amazing figures from thin lay of white ganch (mix of clay and gypsum) on the colour plaster in chaspak technique. This attaches some sensation of weightlessness.

You may visit Fayzabad Khanqah within tours by Peopletravel Company. Having chosen a tour listed below, you will see holy Bukhara with its monuments, sacred places and the endless chain of architectural constructions, which are amazing and fascinating from all points of view.