Ensemble of Khoja Gaukushon in Bukhara

Ensemble of Khoja Gaukushon in Bukhara

The cult Ensemble of Khoja Gaukushon is the largest group of buildings in the centre of old Bukhara. Like others, Khoja Gaukushon Ensemble in Bukhara is included in the UNESCO World Heritage List, and it would be unwise to miss a chance to have a trip to Uzbekistan.

In the past a slaughterhouse was on this place. That is why the word “Gaukushon” means “killing the bulls”. Then a trade square aroused. The important trade center was formed in the early period of feudal Bukhara. Here was a crossroad, and streets leaded to the main city gate. The trade rows were passing along the streets. So, this zone was occupied with Gaukushon square. 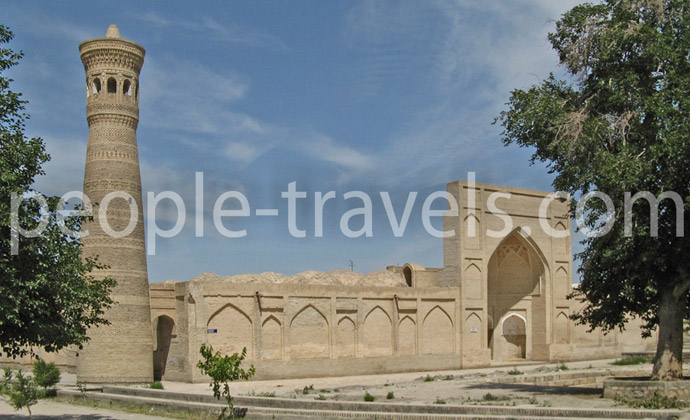 In the XVI century big madrasahs and a mosque with high and wide minaret were built. This minaret yielded in size to Kalyan Minaret (XII c.). The constructions on Gaukushon square were made by the means of Djuybarsk sheikh Khoja Said, known as Khoja Kalon (Great Khoja), that reflected on the name of the mosque and the whole Gaukushon Complex.

In 1570 on the furcation of streets the Madrasah Khoja Gaukushon was built. Hence the madrasah has a trapezoidal form that did not prevent to keep the traditional yard scheme. In 1598 in the North of the madrasah a mosque, named “Khoja Mosque” was constructed.

Khoja Gaukushon Ensemble dates from the architecture of medieval Bukhara during the governing of first khans of Shaybanid Dynasty, when Bukhara was the capital.

The masters of Bukhara architecture school of the XV—XVII centuries used in the building constructions and decor inexpensive and effortless, but effective and efficient hooks. And this method of architecture we can watch in Khoja Gaukushon Ensemble that is a masterpiece of Bukhara school – the leading school of the XV – XVII centuries in Central Asia.

To see the Ensemble of Khoja Gaukushon and other places of interest you can with the help of Peopletravel Company. Please, choose the most suitable tour below and connect with the operator. We are sure, your travelling will be the most memorizable you have ever had.