While traveling around Uzbekistan you can see big variety of beautiful buildings. One of them is Emir-Alim-Khan Madrasah. This madrasah is located in the eastern part of ancient Bukhara and was constructed in XVI on the order of Emir-Alim-Khan.

Decoration is also striking for its grandeur: octagonal prism core emphasized on the bottom panel of marble, on which flaunts a large ornament, lined with glazed tiles on the background of brick deified; huge three-meter inscriptions surround the drum, harnesses lined with blue tiles of the dome.

Today Emir-Alim-Khan Madrasah is newly renovated historic building. For several years in the 50s, 60s, and then after independence in 90s mausoleum subjected the restoration work. It was supplemented with onyx panels, gilding, and painting. Ceiling, as in chrome luxury chandeliers were made by historical records. 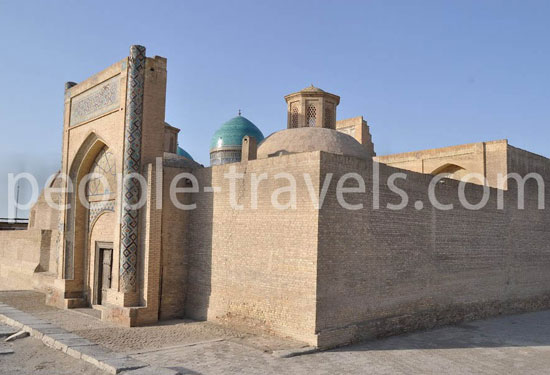 Special architectural solution is used in the interior of the Madrasah. Inside the dome rests on arched Tromp special design: from the top of the arch to the corner of the building transferred semi arch, the space between the arches used for small windows facing to the upper gallery.

Scope of the dome has no ornamental details. Architectural forms and decoration of the Madrasah generally perceived as a single plastic image.

On the walls of the courtyard there is no jewelry. The biggest room in the madrasah is the dome of the mosque, which occupies the entire south-west facing madrasah. The interior of the mosque is made in typical creativity of Bukhara craftsmen type. On the southern part of the inner walls is decorated with majolica tiles with patterns and carved ornament Ganchev, creating a beautiful picture.