The historical inheritance of Uzbekistan

Interesting architectural monuments Chor Minor is situated in the north-east of Bukhara as a part of Labi-Hauz complex. This monument was erected in XVII century and now keeps the unique pages of historical inheritance of our country.

The main entrance of the madrassas, and the entire

set of buildings did not remained the same, but the descriptions that existed in his time described it as yard with magnificent garden and several monuments.

The two-story entrance portal is a part remained of the pristine construction, which was used as a mosque. Despite its unusual exterior design, the mosque has a rather ordinary interior. She served for five daily prayers (Machit panchvakti). 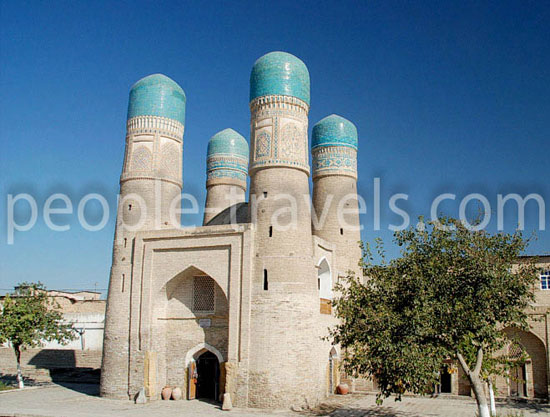 Here is a dome that had a value as a venue for the muslim spiritual rites, which often included singing and playing instrumental music. Interior walls and the dome were decorated with religious inscriptions in Arabic. Remains of inscriptions can be seen today.

To the side walls of the central building of the living rooms has attached cells, which form a rectangular courtyard. On the second floor of the madrasa there was a library containing many valuable manuscripts. Thus, for the functioning of madrasas lacks only classroom and some business premises, such as the canteen.

On the ground near the Chor-Minor the hauz had survived, apparently referring to the same period of time as the complex of buildings. 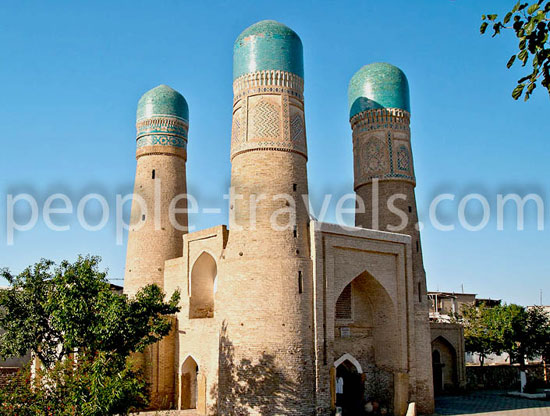 In patterned brickwork its structure composed by the elements of folk ornament. In this scenery vividly reflected a unique style, close to the decor of the mausoleum of Ismail Samani. But on the other hand, the style of the Qarakhanid era differs from the Samanid period. Here lost depth and ease of decorating and underlined plane and ruggedness patterned relief.

Today, Chor Minor surrounded on all sides by modern dwellings, with the inscription in Arabic: "All people are equal before God." This place and many others you can see within tours to Uzbekistan from Peopletravel.