This monument refers to 1380 and devoted legendary prophet Ayub. It is a religious building includes a mausoleum and a sacred spring. Currently, it houses the Museum of the holy water.

This unique sightseeing of Bukhara enclosed in a rectangle walls, over which looms a dome with different silhouettes. The interiors are spectacular ganch lampshades with growing rows of stalactites, creating a transition of stalactite domes.

It is located on the way out of the Ismail Samani park. It was repeatedly rebuilt during the fourteenth and took the form of an elongated prism topped domes over the premises of various sizes and shapes. Sharp, memorable silhouette gives it raised on a cylindrical drum with a conical double dome marking a main room with a well - source.

The monument is a rectangular building complex consisting of 4 rooms, a suite arranged from west to east. Premises built at different times. The oldest of them is blocked high conical dome. The construction of this part, according to legend, is credited with Arslan Khan, in which was erected the Kalyan Minaret. 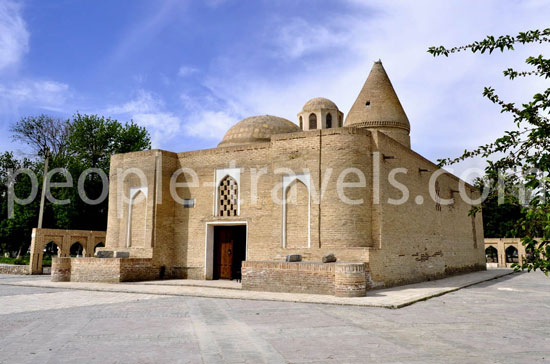 Inside mazar still remained a source of cold water. Folk legend connects the building with the name of the biblical holy Job. The legend tells that in those days, when there was the city of Bukhara, Prophet Job came to these places. The year was dry, and the inhabitants died of thirst. They appealed to the «saint» for help. Job struck his staff on the ground, and out of the scoring key appeared cold water. Hence the name of the monument is Chashma - Ayub, which means "the source of Job."

In reality, the source appears to be healing, and they existed long enjoyed the local population. He called «weak source», as the word "Ayub" can be interpreted as a derivative of the word «mayub» which means to Tajik - weak. This kind of facts is known from the history of the ancient world (Greece, Rome). The monument stands in deep beams with recent large spring flowed. This spring is associated with a well mazar.

Traveling around Uzbekistan with Peopletravel you can see more unique and beautiful places.