Shift into the Eastern Tale

Buyan Kuli Khan Mausoleum was built in 1358 in Bukhara. Here was a vast religious complex, located at the tomb of the popular Sheikh, poet and theologian, Sayf al -Din al- Bokharzi, who lived in the XIII century.

Great interest arises to this monument in the light of its religious, historical and cultural significance. However, many visitors are attracted by the architectural uniqueness that shifts every guest into the eastern tale.

Mausoleum Buyan Kuli Khan is a small rectangular building that is divided into two rooms, in one of which there was one rich majolica tombstone. Everyone who visits this place would be bewitched by blocked squat located inside of the mausoleum. The four corners of the architectural masterpiece decorated with columns with unique colorful patterns that reflect eastern style of art.

All visitors could see that the decoration of mausoleum is typical of architecture Maverannahr, except dark walls inside the building with original ornament. The manganese violet and white colors are exceptionally for those times.

Exterior supplemented iron and copper cannons at the foot of the ramp and a beautiful carved fence. Inscription over the entrance adorned with the name of the owner of the palace, and on the right side of the building was raised minaret decorated ceramics. 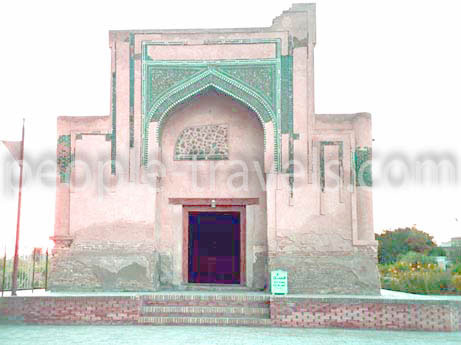 History hasn’t unfortunately preserved the name of the architect who built this splendor. Best decoration of the palace was made by masters of the Fergana valley as well as Rishtan wizards.

The building had 11 rooms and 1 courtyard. Room decorated with traditional Central Asian ganch, gilt cornices etc. Of course, the throne room overshadows everything else by luxury furnishings. There was also a separate room for the court, private chambers Khan and his four wives, facilities for children and harem with 40 concubines. Numerous servants also placed on the palace grounds.

Such beautiful place makes your trip to Uzbekistan unforgettable