Abdulaziz Madrasah was built in 1652 and occupies a special place in the architecture of Bukhara in the richness of artistic decoration and its significance in the Central Asian architecture.

It was erected on the opposite site of the Ulugbek Madrasah and makes him one architectural ensemble. Abdulaziz Madrasah unlike other Bukhara madrasahs characterizes with exaggerated forms and lush luxury decorating. It is adorned with images of the Chinese dragon and bird Semurg. 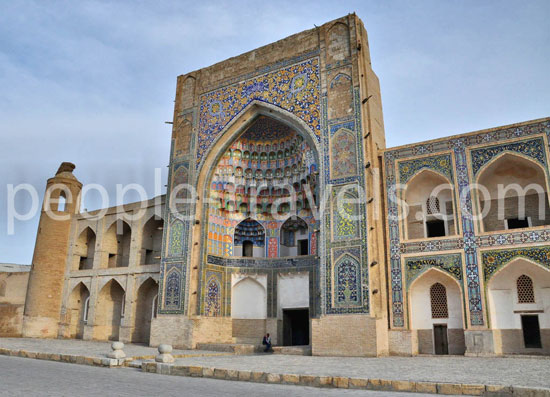 The period of XVI-XVIII centuries was in history as the art epoch of Central Asia reflected in prosperity of Bukhara carvers. Bukhara acquired the status of the capital city, which led to the flourishing of urban development. In the decoration of mosques, madrasahs, gates, doors, tombstones widely used artistic woodcarving.

The masters sought on the basis of a new plan to make some innovations in the design of the exterior facades such circumstances we cannot see inside the madrasah.

The mosque and darshana (studying room) made very simplistic and without any ornaments, only the dome and summer mosque, there are individual samples of simple ornaments. Each door is a remarkable example of fine art of wood carving of Medieval. 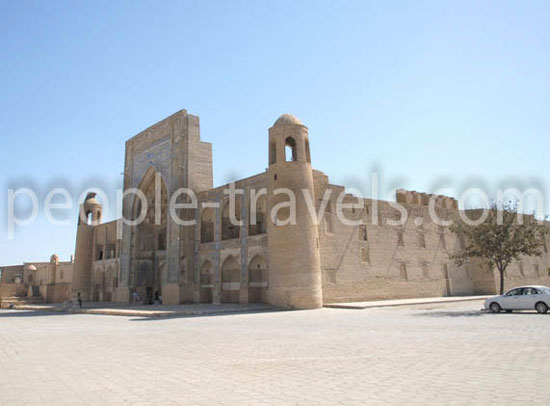 The remaining rooms are the same type of madrasah in the form of direct hujdras quadrangle covered vault "Rumi". Sunlight shines through the windows of hujdras pandjara installed above the entrance doors. In hujras there are still niche and soup (elevation for sitting and relaxing).

Inside some hujras was arranged wooden low shelf in the form of the second floor, occupying almost half hujdras and serving for storage of food and essential household items. If you want to visit this place you can easily book any tour to Uzbekistan you like.