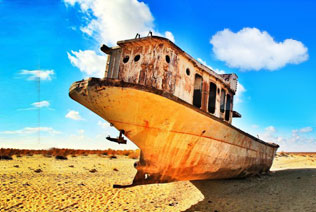 from $190
2 days / 1 night
Nukus - Ustyurt Plateau - Aral Sea - Muynak - Nukus
Aral Sea trip provides a unique opportunity to discover the region with contrasting landscapes of extinct sea and miracles of nature, as well as to become victims of the human madness and breathtaking scenery of new Aral Kum desert.

Tour price per person in USD

Filling this form you can ask any question or send request regarding this tour.

Tours of the Aral Sea

Once one of the largest inland bodies of water in the world, the Aral Sea fell victim to human intervention. Soviet irrigation plans in the 60s took water from rivers to fill reservoirs and irrigation fields, leading to the sea shrinking by over 90 percent in size. As the water receded, the Aralkum Desert was left as a monument of an environmental tragedy on a grand scale.

An Aral Sea tour offers a truly unique adventure into a harsh, otherworldly landscape, unlike anywhere else. It is a trip that is certain to leave a lasting impression in your memories.

Your Aral Sea tour will begin in Nukus city, famous for the Savitsky Art Museum. It contains one of the largest and most valuable collections of Russian avant-garde art found anywhere in the world, 2nd only to the collection in the St. Petersburg Museum of Avant-Garde. The Savitsky Art Museum is a hidden treasure trove of artistic and historical importance.

On your way to the Aral Sea tour, you will have the chance to explore ancient ruins of a lighthouse on the former banks of the sea on the Ustyurt Plateau. The ghost port of Muynak will give you glimpses into the past, with the ship cemetery of an abandoned fishing fleet, left to rust away as they became stranded miles from the sea. They have a museum that explains what the area was like before the exploitation of the environment changed the way of life, forever.

A visit to Sudochie Lake will give you more insight into what has been lost, as it is home to over 200 species of birds. Some endangered species have even been discovered in the wetland among the reedbeds of the lake. 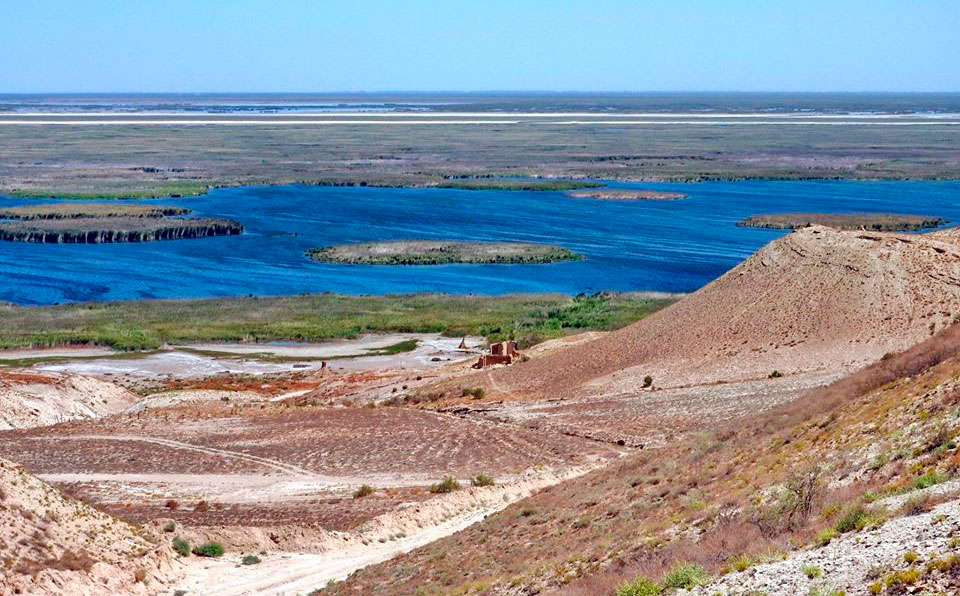 Your trip to explore the Aral Sea will be by 4x4 SUV, and what adventure would be complete without an overnight stay in a yurt, with dinner around the campfire. Your tour of the Aralkum Desert will allow you to experience huge salt fields, which appear in the distance as if they are snow-covered hills. There are ravines reminiscent of the Grand Canyon to discover among the sprawling desert landscape.

You will be returned to Nukus when your tour is complete, giving you the opportunity to visit other historic cities of Uzbekistan. Perhaps you'll choose to visit Bukhara, Khiva, or Samarkand, the oldest continuously inhabited city in Central Asia. Located on the ancient Silk Road trading route, these cities boast impressive mausoleums and mosques that are highly recommended to visit.

The history of the Aral Sea changed forever when large-scale construction of an irrigation system began in the 1960s. No one imagined the eventual fate of the area and the destruction caused by the change. The 4th largest inland sea in the world, covered an area of over 67,000 square kilometers before construction began, with a length of 427km or 265 miles.

Irrigation was needed to serve cotton plantations in the area. With the irrigation system in place, the plantations grew in size, greatly increasing the water from the Amudarya and the Syrdarya rivers used in irrigation. These were the main rivers flowing into the Aral, with the loss of water causing the unforeseen destruction of the sea.

The Aral Sea is a contradiction. On the one hand, a disaster to the environment and the lives of the people living in the region. And on the other, a uniquely beautiful and strange place of contrasts, which are difficult to find anywhere else.

Understandably, travel to the Aral Sea is attracting more tourists, for both its amazing scenery and the tragic appeal the region offers. Seemingly unending views across the newly created desert await, with unforgettable adventures into an environment unlike any other on offer, when you book a tour of the Aral Sea.