The Syr Darya has a reputation for the "Queen of Central Asia", because it is the longest (2,992 km) and the second most abundant river of this region. Starting in the mountains, it passes several natural zones, flowing between hot sand dunes, snow-covered shores in the Baikonur region (Kazakhstan), and dissolves in the Aral Sea.
Compared with the major water arteries of the world, the Syr Darya of Uzbekistan is not the most abundant - about 700 m3 / s. But thanks to spring melting of ice and snow in the mountains, the river flows heavily.

When the Naryn and Karadarya rivers merge in the mountains the Syr Darya River rises in the eastern part of the Fergana Valley. It overflows the valley, then it crosses the Farhad mountains, forming the Begovat rapids. Further, the river enters the Hungry Steppe - a huge clay and saline desert.
The Angren, Chirchik and Keles rivers, which are the large tributaries of the Syr Darya are in the middle reaches of the river. Here in 1949 a large Syr Darya water power plant was constructed.  It was the most powerful station in the Uzbek SSR. 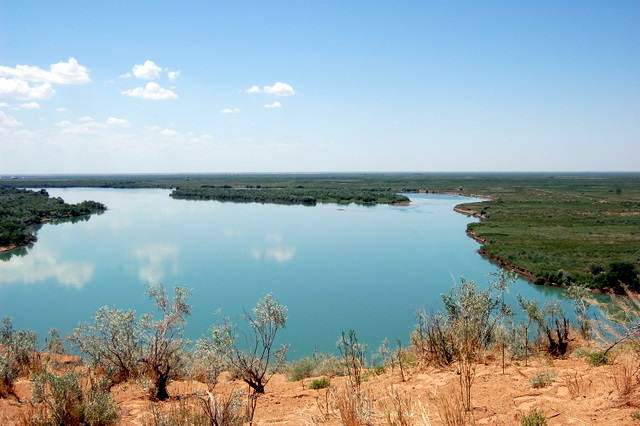 Etymology of the Syr Darya

From local Turkic dialects the first part of the word "Syr" can be translated as "mysterious", "secret". And "Darya" means a river.
Some other scientists suppose that with the use of various Iranian and Turkic languages, "Syr" is explained as "abundant", "good", "spacious", "supreme" and "main”.

According to annals of Greek historians the middle course of the river was called "Tanais", which was carried from the famous river Don-Tanais, which overflowed the lands of the Scythians. The presence of two Tanais, Central Asian and European, was noted by the Greek writer Arrian. By his hypothesis, the Syr Darya also was called "Yaksart" - an ancient local name, which probably was distributed among the local Saks tribes.
Strabon wrote that the river Iaksart separates the Saks from the Sogdians. Sharafaddin Yazdi called the Seikhun River the Syr Darya and claimed that it differentiated Mogulistan and Maverannahr.

Popular believes and a legend of the Syr Darya

People long since settled along the riverbed of the Syr Darya. The local population knew about the volatile nature of the river and depended on it, and tried to appease the river with sacrifices. And now some residents of coastal settlements believe that by bringing the river a victim in the form of an animal, they can protect their homes from another Syr Darya spill.

On the Syr Darya shore there is a mountain ridge Shirin. The character of the folklore of the Turkic peoples, and especially the Uzbek had this name. The narrative of the love of Farhad - stonemason and the beautiful niece of the sultan Shirin is touchingly described in the works of medieval authors Nizami Gyanjavi and Alisher Navoi. According to the legends, Shirin was to marry a man who could lead the waters of the Syr Darya through the Hungry Steppe. Farhad fulfilled the dream of Shirin and built a canal with the help of which the Syr Darya rushed to the Hungry Steppe. However, the padishah Khosrov deceived the girl and convinced her that he fulfilled her desire, and Shirin married him. When the fraud was exposed, Farhad was petrified by grief, and Shirin, who shed a lot of tears, turned into a river.

Today, the Syr Darya waters are consumed for economic needs. The beauty and riddle of the Syr Darya River captivates new adventurers every year.

Become those lucky people who succeed to visit Uzbekistan together with Peopletravel Company.