General information about the Aydarkul Lake

The Aydarkul is one of the most vivid sights in Uzbekistan, it is the motton blue sea in the eternal Kyzyl-Kum sands. It is located 50 km. from Nurata city and is an artificial pool in the Aydar-Arnasay system of lakes, which includes three salt lakes: Aydarkul, Arnasay and Tuzkan.
The length of the Aydarkul Lake exceeds 250 km., and its width is 15 km. Today the mirror of the giant Aydarkul Lake is 3000 squared kilometers. It lies at an altitude of 247 m. above sea level.

History of forming the Aydarkul Lake

The history of the formation of Uzbek Lake Aydarkul is very interesting. The fact is that until the middle of the last century, on the site of the lake there was a dry land that did not have access to moisture, except for the spring season. In the spring, Lake Tuzkan, which evaporated with the coming of the heat, was formed here. At the same time, the Chardara hydroelectric power station with sluices to verify the water level was built. Water in the hydroelectric power station came from the Syr Darya River, but in 1969 the station could not withstand the abundant water flow and the floodgates were partly opened to avoid dam breakthrough. Therefore, the water began to flow into the Arnasay lowland, where later Lake Aydarkul was formed. The lake unites many small rivers (kultuks).

Not only narrow shallow straits, but also all small lakes connected to large water during the spring rise, or even quite insulated small tanks fed by groundwater are called the kultuks.
The Aydarkul has a great variety of kultuks, and this is due to the specificities of the local terrain. The lake itself is a submerged salt depression, surrounded by low hills, beyond which a level steppe like a table stretches. After flooding of this hollow, the hills turned into islands and peninsulas, and depressions between them are these same kultuks. To tell the truth, you can not simply get to the big Aydarkul water, you have to force several kultuks. The salinity of the water rises from the outfall to the top of the kultuk. This is obviously seen in the algae, by which they are very strongly overgrown. If the thickets are continuous in the mouth, in the upper reaches they are sometimes absent altogether. They simply can not grow in such a salt brine. 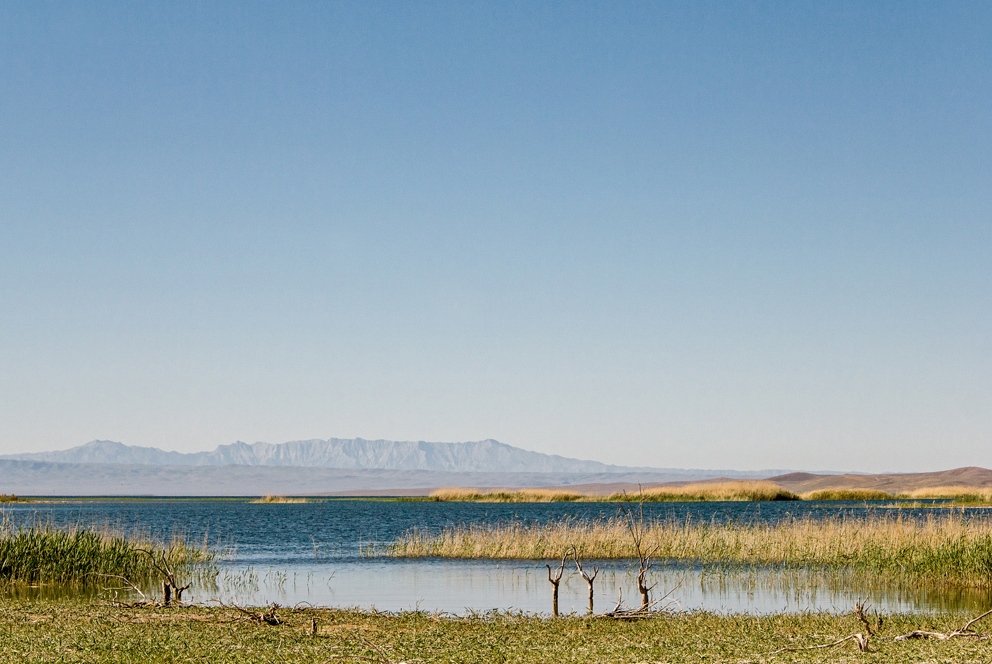 An enormous lake with pure water, sandy beaches and farawayness from civilization create first-rate conditions for the development of fishing and observation of rare species of birds.
On the banks of the Aydarkul miracle there are many sorts of birds which are listed in the Red Book: curly pelican, cormorant, red-breasted goose, lesser, white-eyed duck, steppe harrier, white-tailed eagle, black griffon, etc.

One of the exciting adventures on the Aydarkul is fishing. And it is that for what numerous tourists from all over the country and world come. The lake is just teeming with fish and along with traditional kinds such as carp, barbel, asp, pikeperch, catfish, bream. For a worldly-wise fisherman it will not be difficult to catch a mudfish, marinka, or tupak.

If you are beat up of the city bustle and noise, then the Aydarkul is the best place to relax. Silence is a distinctive feature of the lake, as it is situated far from inhabited areas. Today, 345 families live in the Aydarkul lake area, it is approximately 1760 people.

Among the tourists "yurt camps" along the Aydarkul are popular. They are located about 1.5 hours drive from the lake. For centuries, nomads have been living in such yurts. Rest in such yurt camp leaves an indelible impression on travelers. Here you will be offered an evening at the fire for traditional songs of a local akyn, a watching of the dawn and a camel ride along the sandy shore of the Aydarkul.

Of course, the main thing, for what hundreds of townspeople come here is the lake itself. Lake Aydarkul is charming, as in the midday heat, and at sunset. The lake is quiet and calm, gently enveloping the coolness of anyone. It is of an amazing blue color at depth and sometimes transparent amber near the coast. It is smooth, like a mirror, and yet, here you can admire the real surf. And somewhere far away, the horizon line connecting water with the sky extends. And looking at it, one think: "Why?!" Why are these scales called just a lake?

Repose on the unique kilometres-long beaches with delightful soft sand and a restful atmosphere will leave a lot of enjoyable impressions. And Peopletravel Company will help in it. The Aydarkul Lake beckons to travelers, tired of the desert and the steppes. Please, book a tour to the Aydarkul Lake in Uzbekistan!