Water resources in Uzbekistan play an important, irreplaceable role. They occupy on vast flat areas. Water is of use for irrigation, and its energy for producing an electric current. Thanks to water, the Uzbek man turned the waste into blossoming oases, flooded the cities and villages with light.

There are about 18,000 brooks, sais (mountain rivers) and rivers in Uzbekistan. 10 thousand of them are in the Amu Darya basin, 5 thousand are in the basin of the Syr Darya. There are 525 differen in size lakes in Uzbekistan. There are 53 reservoirs with a total useful volume of water of 15 km.cub. In the basins of the upper reaches of the rivers Surkhandarya, Kashkadarya and Chirchik there are 525 glaciers with a total area of 154.2 km2. 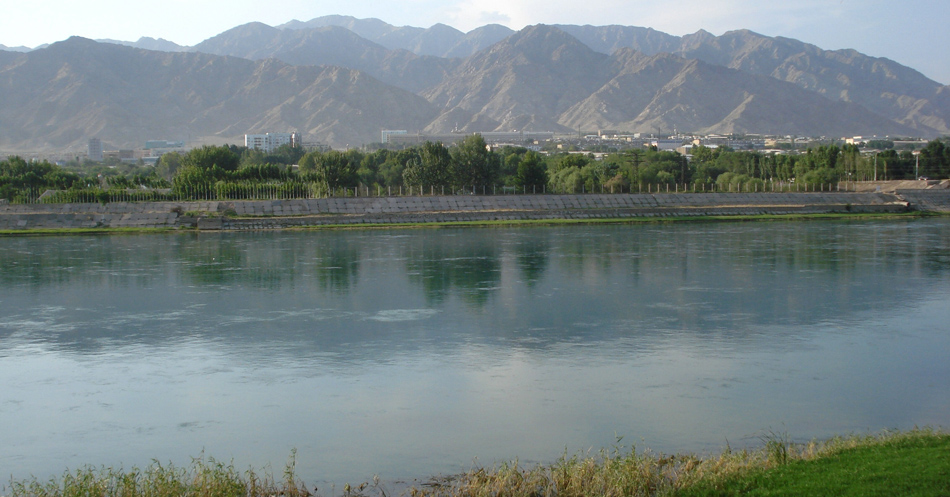 Because of seasonal snows the rivers of Uzbekistan form their runoff. Glacial and rain feeding of mountain rivers is insignificant. Ground waters are the main feed source for all rivers. Cracked and fissured - karst ground waters are widespread in the mountains, artesian basins are on the plains.

Right when the natural reserves of moisture accumulated by the soil for autumn, winter and spring are already depleted in the plains, and when the cultural vegetation, especially in need of water, the rivers and glaciers carry it in the required quantity. Examples of such Uzbek rivers are Chirchik, Karadarya, Naryn and small rivers Sokh and Isfara, flowing from the northern slopes of the Turkestan range to the Ferghana Valley.

Uzbekistan has many artificial lakes - reservoirs which carry out only seasonal flow regulation. The reservoirs are many times larger than the natural reservoirs of Uzbekistan. The biggest are Kayrakkum, Kattarkurgan, Tuyabuguz, Chardara, and South - Surkhan.

In the valleys of large rivers, along the periphery of the cones of removal, there are many bogs. It is often difficult to distinguish swamps from lakes, since in dry periods of the year some Uzbekistan lakes turn into wetlands. In mountainous areas, bogs are less numerous, and their area is usually small.

Uzbekistan is also rich in numerous natural sources of mineral waters, which due to their chemical composition have a beneficial effect on the human body. Among the revealed over the last decade, especially valuable are hydrogen sulfide, radon, aquiferous and weakly mineralized alkaline thermal waters.

Many of Uzbekistan healing springs are not inferior to the mineral waters of the world's famous balneological resorts, and such sanatoriums as Chartak and Chimion built on the basis of their use are known far beyond overseas.

Most of Uzbekistan rivers arise in the mountains. When entering the plain, some of their water is disassembled through canals for irrigation, the other part is evaporated or absorbed into the soil.

The Amu Darya is the most abundant and largest river of Central Asia. The Arabs called it Jay-hun, the Greeks called it the White River, the locals named it Omul. The Amu Darya is one of the most turbid rivers in the world. In one cubic meter of its water there are 3740 grams of silt.

The longest Uzbek river is the Syr Darya (3,019 km); and in terms of its high water level, it ranks the second place after the Amu Darya. Ancient Arabs called the Syr Darya Sayhun, Greeks - Yaksart. The Syr Darya feeds on thawed snow and glacial waters, so the most high-water period falls in June - August.

The Chirchik, the right tributary of the Syr Darya, is the largest and most water-rich Uzbek River. The river’s length is 397 km. The Chirchik had several more tributaries (Aktashsai, Galvasai, Parkentsai, etc.), but now they do not deliver their waters to the river, since they are fully disinfected for irrigation.

The Zeravshan River is considerably inferior to the Amu Darya and Syr Darya by its water innage and length, but it is no less important in Uzbekistan. On its shores cities-pearls of Central Asia - Samarkand and Bukhara sprang up.

The river in Uzbekistan Akhangaran is the right tributary stream of the Syr Darya. The names Angren and Kultushkan are also used. The Akhangaran originates from the merger of the Aktashshai and the Urtalyksai. The length of the river together with the Aktashsai is 236 km, and the basin area is 7710 km ².

The lakes in Uzbekistan are small and uneven. The Sudochye Lake and the Arnasai lakes are the largest.

The Aydarkul lake is a part of the Aydar-Arnaisai water system. Lake Aydarkul is called the turquoise "sea in the sands". It is able to delight and enchant the most experienced people, who have seen on the earth much beauty and a lot of rarities of nature. Uzbek Lake Aydarkul is a kind of ecological antipode of the Aral Sea, a huge drainage basin. It attracts travelers, tired of the desert and the steppes.

The Sudochye lake is one of the richest in diversity avifauna of water bodies in Uzbekistan. In total, there were more than 230 species of birds, including 12 globally threatened species, as well as 3 types, endangered in Uzbekistan.

As elements of the landscape, Uzbekistan water resources influence on other components of nature. Rivers and lakes in Uzbekistan change the terrain, participate in the formation of soil and growth of plants. They are important for the national economy.

To see all the beauty of Uzbekistan rivers and lakes visit our country and enjoy the nature. To make it more comfortable, please, address Peopletravel Company. Our agents will make out for you the suitable trip round Uzbekistan and fulfil your wishes.