If you had never heard about the Ugam range, its beautiful nature, climate, flora and fauna, please, look through the article and conceive a wish to travel to Uzbekistan.

Geographical location of the Ugam range

The Ugam range is a mountain ridge in the Tien-Shan mountain system, located at the border of Kazakhstan and Uzbekistan.

Among the main branches of the Talas Alatau the Ugam range is the extreme western, which is rising as a high barrier above the Pskem valley. Under the name “Ugam” this range is stretching from the river mouth Pskem till the mountain junction in the Aksu river head, being the watershed of the Pskem and Ugam on the one side; and the Pskem and the upper course of the Arysi from the other side.

In the area of Sayram mountain in the sources of the Anaulgan river the Ugam range also carries the largest clusters of snow and ice streams.

The Ugam range is mainly folded from the sedimentary rocks (particular, limestones) and granitoid intrusions. 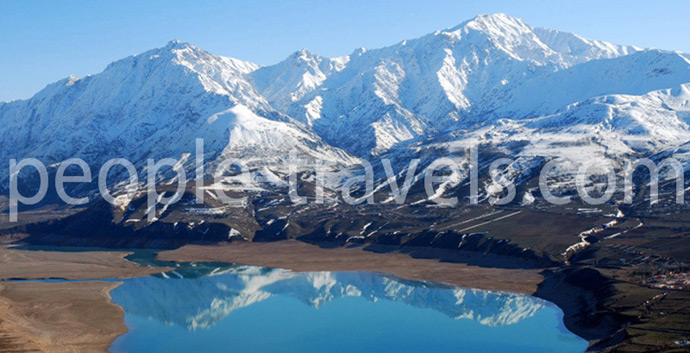 On the slopes the vegetation is mainly subtropical, semi-desert and steppe. In the valleys of the Ugam range there are deciduous forests; and in the region of highland there are meadow steppes and alpine grasslands.

In Ugam travelers can be interested in hiking, trekking tours or engage in rafting and kayaking down the Ugam river.

The weather in Ugam is always mild and cool. The Ugam range close to Tashkent is a favourite recreation place among Uzbek population and guests of the country. There are many recreation sites and dachas in this area. The Ugam river makes this region more picturesque and attractive. The water in the river is always cold even during “chillya” (the hottest period in Uzbekistan).

Moreover, the water in the Ugam river is considered to be healthy. In the mouth of the river there is a radon source. In the field of formation of the mainstream, the Ugam runs in rock fractures where from the bowels of the earth outside radon gas escapes. Radon is a radioactive inert gas and its concentration in the water of the Ugam river that is flowing near Khumsan and Khodjikent settlements, is healing.

The Ugam river together with the Pskem, flows down to the Charvak reservoir.

On the spurs of the Western Tien-Shan there is Ugam Chatkal State National Reserve. The reserve was established in 1990. The area of the park is 574,6 thousand hectares.

For lovers of mountain flora the Western Tien Shan is an attractive destination due to the great diversity of flora. Not less than 2200 plant species are found here - from Turan desert flora to the alpine flora of Pamir-Alai. Most of them belong to the angiosperms - 2150 species.

Speaking of mammals, in the dry steppes of the lowlands mole lemming, common vole, tolai hare, porcupine, badger inhabit. In the forests of middle mountains one can meet Turkestan rat, forest dormouse, wood mouse, badger, wild boar and fox. In the high plains marmot, relic gopher, gray hamster find their own food. The white-clawed bear can be also met here.

On the rocks and screes Siberian goat, horseshoe bat and red treecreeper are met. On the territory of Ugam reserve there is marmot of Menzbir, listed in the Red Book of Uzbekistan.

If you had never before been in Ugam, you should address yourself to Peopletravel Company and book mountain tours. While your rest in Ugam you will have a great opportunity to make Ugam range images and the rest of the year remember wonderful days having spent in the Ugam mountain range.