The total glaciations area is about 70 square kilometers. There are about 100 of glaciers. The high level of the snowline on the north-western slopes is 3700 – 3800 meters; on the south-eastern slopes – about 4000 meters.

On the sides of the Pskem range there are subalpine and alpine grasslands, at an altitude above 3500 m. there are nival landscapes.

On the Pskem range and its spurs there are about 60 passes. The height of the spurs is from 2200 till 3800 meters.

The crests of the main and side ridges are narrow and rocky; the peaks are sharp-pointed; the slopes are steep and broke up with deep gorges and gullies. The rocky precipices, hillside wastes and accumulation of large stones substantially hamper the movement.

Climate of the Pskem range

Summer in the lower reaches of the river is hot and dry, in the upper tiers of the mountains the climate is cool. Rains are rare in summer, but snow in the upper reaches of the river at the ridge tops of the Pskem range does not melt all year round, and forms here small areas of permafrost – snowfields and glaciers. Autumn is dry and cold. Frosts can begin in the middle of September, and snow falls in middle of October and is more stable in the upper zones of mountains.

Vegetable and animal world of the Pskem range

Near the human activity the lands are occupied by garden and vegetable crops - orchards and vineyards, walnut plantations along the banks of rivers and streams.

The slopes of the Pskem range of Tashkent region are abundantly covered with vegetation. Here are wild fruit trees and shrubs. The river banks are occupied by Central Asian juniper, poplar thickets. 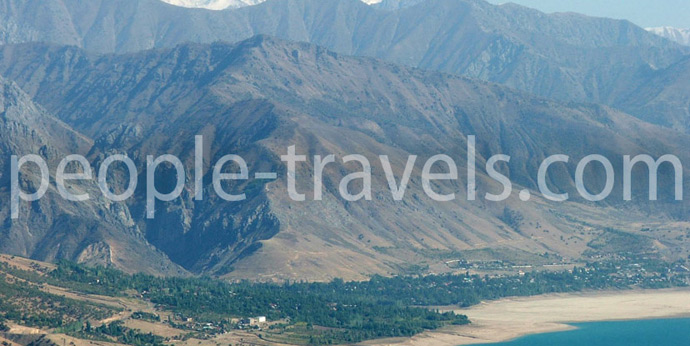 Human activities can also be deeply observed in the mountains – as a kind of set apiaries and shepherd lands.

In the valley of the river Pskem there are white-clawed bears. On tributaries of Maydantal and Oygaing one can meet wolves. Tien Shan fox, marmot, a stone marten inhabit the valley. In the Pskem river basin there are Turkestan lynx and snow leopard. Practically far and wide, one can meet the wild boar and the badger. Many birds live in the Pskem mountains. In the herbaceous slopes there are wild turkeys and mountain partridges. Golden eagles, bearded vultures, Egyptian vultures nest in the rocks.

Rivers of the Pskem range

In the Chirchik river basin the Pskem range acts as the main watershed between the rivers Pskem with the left tributary of the Oygaing and Chatkal with the right tributary of the Chandalash. The rivers have rocky bottom with many rapids; in some areas there are continuous rifts, the banks are rocky. The rivers do not freeze all year round.

The river Pskem itself is typically mountainous, with swift movements and a significant debit. It does not freeze in winter. The route from the Pskem mouth to the last village Pskem is more than thirty-five kilometers away, and all along here there are orchards, vineyards, agricultural crops and etc. Approximately in the middle of this distance, on the left bank of the Pskem, at the outfall of the mountain Ispaysay a small village Ispay lies.

Sights of the Pskem range

The attraction in Ispaysay river region is a great scenic "circus" formed by ridges, spurs and rocky areas of the Pskem range. It is easily visible from the upper part of Surhat hole. This “circus” has its own unique beauty: blanket green coverlets surround rocks with snow, forming the unforgettable and landscape pleasing to the eye.

Here, in one of the rocky ledges, among small caves, nature created an unusual conglomerate stone-pillar. And in the riverhead of the Makarsaya there is small juniper, among which there are instances of a venerable age. The abundance of snowfields, glaciers and mountain passes of the Pskem range make this area particularly attractive for sports tourism, including trekking, hiking and climbing.

In the upper sources of the Mulalasay, falling into the Pskem river (near Mulala village) fossil remains of sea animals were discovered.

Facts about the Pskem range

Altogether, on the territory of the Tien-Shan there are more than 8000 glaciers. The area of glaciers is 7.3 thousand square kilometers. Fresh water that is preserved in the mountain glaciers is estimated at 650 billion meters. During the period of 1960-2005 on the Trans-Ili Alatau mountains about 100 glaciers disappeared; glaciation area of the Western Tien-Shan (Pskem mountain range) decreased by 16.8% over 20 years.

Other historical facts about the Pskem mountains

The mountaineering opening up of the Pskem range started at the beginning of the 80-s.

In June of 1982 in Ispay thanks to endeavours of trainers-instructors of Tashkent section the camp-out for Uzbek alpinists was organized. Consequently, the routes of almost all peaks of “circuses” and Duvalisurh (from 1B to 5B complexity degrees) were passed. Unfortunately, the classification of the routes had not been carried out up to the end, so they are few in the Classifier.

If you are eager to know more about the Pskem mountains, please connect to the managers of Peopletravel Company. Our specialists will give you the exhaustive information and arrange trekking tours. 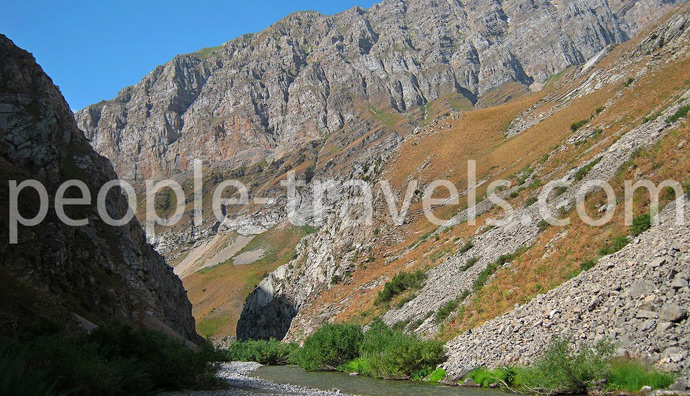 For professionals there are mountain skiing tours in the Pskem range from Peopletravel Company.

Don’t neglect the opportunity to see Uzbek mountains. Impressions will long in your memory, and Pskem range images will remind of excellent journey.