No mountains, no rocks, no roughness. Only a smooth cavity - a sheet of paper on which one could write all the books of the world.

The name "Kyzylkum" from Turkic can be translated as "Red Sands". Sands, formed by weathering and deflation indigenous sandy sediments have reddish color here.

The Kyzyl kum desert is a plain with remnant mountains, folded with rocks of the Paleozoic era. The most of it is occupied by sand dunes, extending a height of 3 to 75 meters, and close to the wells and towns there are loose barchan sands. The dunes, invading the Karakul and Bukhara oases in the south of the Kyzyl kum desert are now secured with plantings of shrubs and trees. The plain area of the Kyzyl kum consists of Cenozoic clays and gritstones. In the north-west and north there are river sediment contains of the Amu Darya and Syr Darya channels, once guttering into the Aral Sea.

The surface of the Kyzyl kum desert has flat overall dip from the south-east to the north-west to the seashore of the Aral.

Throughout the Kyzyl kum desert there is no natural watercourse, only intermittent river called Zhanadarya. In the south-western and central part of the desert large artesian basins were found. Around dug wells on this territory there were areas of cultivation of melons, experimental stations for the investigation of farming and ranching opportunities in such conditions. Some of the Kyzyl kum desert is mastered by orchards, rice fields and vineyards.

The Kyzyl kum desert on the world map is marked as one of the large-scaled deserts of Eurasia, which stretches from the littoral of the Aral Sea in the north to the fertile oasis relatively narrow strip near the Zarafshan river in the south.

The climate in the Kyzyl kum desert is acutely continental. Summer is sizzling hot, with the average temperature in July from 26 to 29 ° C, in winter, the January temperature is from 0 to -9 ° C.

Here are little precipitation falls. The annual quantity of precipitations is on the average 150 mm, although in the mountain slopes they are a little more. Snow rarely falls here. On areas irrigated by waters of the Syr Darya and Amu Darya here wheat and cotton are grown. But high volatility contributes to the rapid salinization of soils, making it difficult to agriculture.

The climate is associated with Kyzyl kum desert flora and fauna. The Kyzyl kum desert animals are snakes, jerboas, lizards, black lizards, gazelles, squirrels, foxes, hares, eagles and owls; drought-resistant Kyzyl kum plants are saxaul, ferrule and camel thorn. Vegetation and animals are wonderfully adjusted to weather conditions of the Kyzyl kum desert, essentially, to the absence of water, extreme temperatures, strong hot winds. But by-turn, the biomass of the Kyzyl kum is higher than the biomass of the taiga, forest tundra and tundra. Most animals are lizards and rodents, but there are invertebrates and arachnids. And exactly during the periods of spring and autumn you can see its local inhabitants.

Even in past years, the Great Silk Road passed through the Kyzyl kum desert. Such cities as Samarkand, Khorezm, Bukhara were flourishing thanks to it. The caravan routes were not only from oasis to oasis and from bazaar to bazaar – the Silk Road connected the holy places and was like a nervous system in the human body.

Cities had their own caravanserais, where goods were stored and people lived. Merchants from other countries came to these places for outlandish oriental goods. At these outlets many people of different professions were busy. They were moneychangers, translators, camel drivers, tax collectors, guards of the caravans. The ancient cities located around the Kyzyl kum are the pearls of red sands. Oddly enough, but the desert was in a full swing stormy life.

Many believe that in the Kyzyl kum desert except sands there is not look at that, but it is the incorrect view. Indeed, the desert conditions are quite severe, there are very little rains, and it is not suitable for anything. Nevertheless, people who were born and grew up in these parts, believe that there is no more beautiful place in the world. 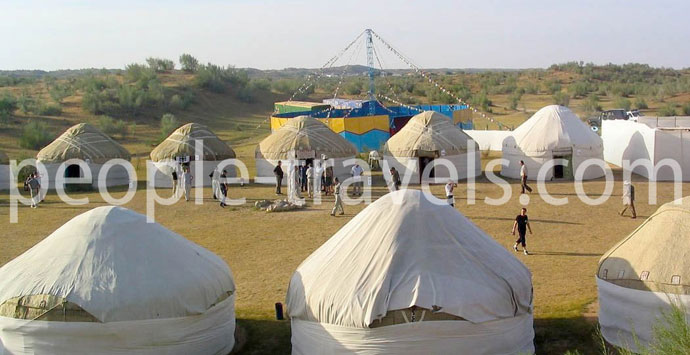 In addition the depths of the mountains in the Kyzyl kum desert in Uzbekistan are full of gold. These are unique mountains, the beauty of which will impress even the most experienced traveler. In the mountains marble, graphite, turquoise, etc are designed. Urana and phosphate deposits are in the center of the desert. The largest gas field - Gazly operates in the desert. Many towns and even big cities such as Zarafshan, Uchkuduk and Navoi are also in the desert.

The Kyzyl kum is the desert, where a range of unexplored abnormal areas was found. For example, in the central Kyzyl kum the petroglyphs, which depict people in suits and something like spaceships were found. The witnesses of frequent visits of aliens are modern inhabitants of the desert.

For centuries the attributes have remained unchanged in the Kyzyl kum desert. They are yurts and camels - "ships of the desert"

Today going on travels on camels across the Kyzyl kum desert is of wide popularity. The Kyzyl kum is the most likely area of domestication of the Bactrian camel. Even the scientific name of the animal speaks of his Central Asian origin, as in ancient times the vast historic area along the middle and upper reaches of the main river edge - Amudarya were called Bactria. Peculiar books, engraved by our ancestors on the rocks helped scientists to recover the history of domestication of camels. They are, of course, the most ancient books, named drawings – petroglyphs, which were found in foothill areas of Central Asia, including the remains of the ancient hills in the Kyzyl kum desert.


During the tours round the Kyzyl kum desert you will be offered the acquaintance with nature and visits to yurts of nomads, where local dishes will be cooked for you and information regarding culture of nomadic tribes will be told you.

The secrets of the Kyzyl kum desert

Until now, about the culture and history of ancient Khorezm is known very little. The Kyzyl kum desert keeps the most of the material traces of its former magnificence. But the questions here are still far more than the answers to them, because the culture of the ruins of ancient Khorezm is yet poorly understood. Mostly they are in the Kyzyl kum desert. Supposedly, here are about 300 castles, to dig up which is not yet possible. But even some remains of the fortress tell of a highly developed civilization of ancient Khorezm. Koy-Krylgan-Kala fortress, which in S.P. Tolstoy’s judgment, the academician, was both a temple, dedicated to the star Fomalhaut, and the observatory.

The Kyzyl kum desert keeps a lot of mysteries and findings.

One of these discoveries was the "Stone Forest" in the hole Dzharakuduk - a unique natural phenomenon. "Stone Forest" belongs to the Kyzyl kum desert, in a reserved part of Mingbulak basin (near the highway Uchkuduk - Nukus).

The literature sources reported about the "buried dense forests at the root, which were located on the coasts of the ancient interbasin flows and estuary basins of the first half of the late cretaceous period. The prints of sycamore, laurel, magnolia and other angiospermous leaves, the remains of litter and tree waste, preserved in some places were found here.

The researchers-naturalists affirm that near Dzharakuduk areas where many millions of years ago "antediluvian forests" grew, were autopsied. Later they were covered with layers of marine and river sediments. Wood mineralized and petrified, but fully retained its former appearance and structure. In the ancient soil layers, near Dzharakuduk, the Kyzyl kum area, some dinosaur bones were found. 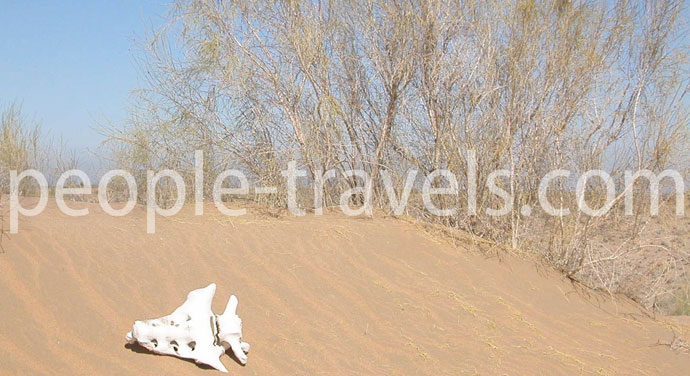 Today this place is well known and studied by scientists and geologists. Many sensational discoveries were done. In terms of diversity and quantity of finds there is no such a place in the world.

Among stone piles, cuts coastal and sea formations one can see stone structures, resembling the sound pipes of the Gothic organ. They are petrified trunks of the ancient forest.

The sections of groundwater deposits of the hole are indeed larded with the leftovers of organisms, among which fragments of skeletons of vertebrate animals and reptiles dominate. The collection of finds was replenished by a set of teeth of amphibians. The complex layers of fossils consist of layers of clay, freshwater and marine sediments, sandstones and other rocks. All mentioned above witnesses to the fact that the Kyzyl kum was once a unit of the World Ocean.

A man, who has never been in the Uzbek part of the Kyzyl kum, could hardly guess that there is a tourist infrastructure here. And it is, but non-standard - for lovers of adventure tourism. The main transports on the routes are jeeps, but you can go on a "safari" on a camel. Travelers who want to witness the Khorezm fortresses and desert landscapes in the Kyzyl kum become more and more every year. The best time for such adventure holidays, is, of course, spring - when wild flower crocus, tulips, poppies and other flowers bloom on the spurs of the mountains.

They say, cloudless happiness is possible only in the desert. In the Kyzyl kum every man has rest, time and space, required to find yourself, to look into the distance or inside yourself, to discover environment and think about everything that is learnt from holly books.

Peopletravel Company in turn offers an unforgettable adventure tour in the Kyzylkum. Select the most appropriate tour or we will develop for you an individual Kyzylkum desert tour.