I strangled love and ruined it forever,

I cooled the sultry ardor by means of weird thoughts.

I put myself in evil chains whatever,

I turned into a desert – a dead waste Aralkum.

On our blue planet Earth there are many places, painted in yellow heat and drought, called the deserts. About a third of the land surface is made up of various types of sands with very little rainfall and vegetation. Some of them were formed naturally over millions of years, while others were just a couple of decades because of the reckless actions of a man.

But the most noted instance of this is the Aralkum desert - the desert, which appeared on the site of the once full-flowing salt lake in Central Asia under the name of the Aral Sea. 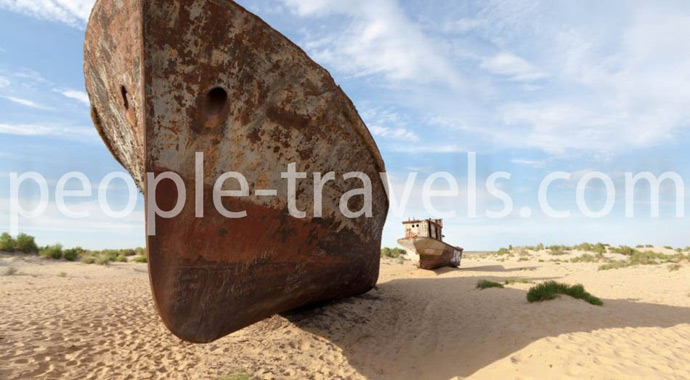 The Aral Sea was one of the outsized inland closed brackish waters of the globe. The Aral Sea acted as the giant of the evaporator. About 60 cubic km of water evaporated from it and entered the atmosphere. Until 1960, the Aral was the fourth hugest inland lake on earth.

The sea with the value to Ireland evaporated for 90%. The storms of sand and salt have led to chronic conditions of local dwellers. And the Aral salt, driven by winds, according to scientists, are found in the Nordic countries and Japan.

This sea-lake completely dried up, when a man violated its water balance, using lake waters for irrigation of vast agricultural areas. The area of the Aralkum, a man-made desert, is 38 thousand square kilometers, and continues to increase, although people are trying to return the Aral Sea.

The dried-up seabed turned into the sand and salt desert - Aralkum. This is a powerful source of wind and dust removal of salt - up to 100-150 million tons per year.

Due to the abundance of salt the desert is sometimes called Akkum, which is translated as "the white sands".

Versions of the rise of the Aralkum desert.

There are several versions of Aral death. One of the original versions indicates that the sea was shallow due to the fact that the waters of the Amu Darya and the Syr Darya, which flew into it, set aside for sewage cotton farms in large volumes.

Also, a group of geologists believes that the Caspian and the Aral Sea are joined with the underground channel through which water flows in one or the other direction: from the Aral Sea to the Caspian Sea, and vice-versa. It is believed that this depends on the Earth's rotation and solar activity.

According to other researchers, the Amu Darya channel enters the earthquake zone. It is very likely that in these moments under the channel the voids are opened where the river "drains" the water.

And one of the advanced leads regarding the rise of the Aralkum desert indicates that the climate in Central Asia over the past 20 years has become drier.

40 years ago the Aral Sea was an oasis of freshness between two sands - the Karakum and the Kyzylkum. It was a huge body of water with a rich living world, with a huge biological diversity that could be compared with Africa.

Today the Aralkum flora is delineated by 423 species of plants which are among 44 families and 180 generas. The specific diversity of vegetation of sands, which is focused on the one-time islands of the east coast, is the highest.

The strip of the deserted Aral Sea is distinguished by a lower biodiversity than the coast. Among the plant species the coast of the Aral Sea 30 species are valuable fodder plants. Here are about 30 species of medicinal plants. Weeds are 31 species. More than 60 species of local flora are implicit fitomeliorants for drained coasts.

In the last 5-10 years, because of the desiccation process of the Aral Sea, the Aral Sea climate change is marked. Earlier the Aral acted as a regulator, mitigating the cold winds coming from Siberia and reducing, like a giant air-conditioning effect of heat in summer months. With the tightening of climate the summer has become more dry and short, winter has become more long and cold.

A distinctive feature of the Aralkum desert is a sharply continental climate. In the Aral Sea coastal areas the precipitation fell several times. Their value at an average is 150-200 mm with essential seasonal unevenness.

There is a high volatility with decreasing humidity of 10%. The air temperature became lower in the winter and increased in the summer by 2-3 ° C. In summer months there are high temperatures (up to +49 C). A typical feature of the Aralkum is the high frequency and long duration of dust storms and blizzards. Often there are strong winds in the Aral Sea area. The maximum wind speed can reach 20-25 m / s.

The Aral Sea will inevitably disappear in the beginning of the 21st century. This conclusion was drawn by an association of scientists and specialists from Uzbekistan.

The study of the history of the Aral Sea over the past 40 years has allowed the researchers to infer that the sea has dried half. The pond was divided into two - the Large Aral and Lesser Aral Seas. Ecosystems perished.

Nevertheless, we have it from an unimpeachable historical source that the Aral Sea had dried out years ago and some day the desert Aralkum would vanish in the same way as it has appeared.

Legends about the Aralkum desert

Once, when the Aral Sea was a full-blown sea, it had a great deal of islands. Islands hid and hide today many legends and mysterious stories. The most interesting islands are the island of Rebirth (Vozrojdeniya), the island of Tolmachev, Barsakelmes Island and many others.

10 years later all the islands closed to each other, having formed the Aralkum desert.

In Soviet times on the Island of Rebirth there was a firing ground for the manufacture and testing of biological weapons. Trials were carried out till the end of the 80s.

The island Barsakelmes has many stories. Barsakelmes got its name thanks to the strange phenomenon taking place on its territory. "If you go – you will not come back", such way sounds a translated name of the island.

People tell many stories that there were not isolated cases of missing people who later returned. However, there was one moment. Those people who were considered missing without a trace, suddenly declared over decades. According to the participants themselves they spent on the island for several days.

A similar case occurred with the expedition of surveyors. Having come on the island, one part of the group went to work to its center. When the surveyors reached their destination, they switched on radio, however, the attempts to establish radio communication with the shore, were futile.

Communication was adjusted after about an hour, but as it turned out, for this time on the banks twenty-four hours passed and disappeared people have been already searched all over the island.

There is another story about a man in strange clothes, who was detained by a law enforcement officer. The prisoner spoke in a foreign language.

When the interpreter was invited all were amazed a story of the unusual man. He claimed that he was born in the XVII century. After the shipwreck the man was washed ashore, where he was detained. The argument to the veracity of his words was a rare dialect, spoken in the XVIII century, and the hapless sailor freely knew it.

In fact, most stories about Barsakelmes are based on unsubstantiated evidence, conjectures and legends. Many stories, most likely, are fiction, but local residents shun the mysterious terrain.

The Aral desert of Uzbekistan is a new phenomenon on the world map; and its fantastic landscapes inspire photographers and cameramen. Here, as nowhere else one acutely feels the frailty of earthly existence.

Tourists, guests of our country while using the services of Peopletravel Company can order a tour around Uzbekistan, including the Aralkum desert and watch the lost ships, piers in the middle of the desert, unpredictable and merciless winds and hundreds of kilometers of incandescent sands.