Uzbek somsa is a queen of Uzbek cuisine. No wonder Jami sings of samsa in his rubai.

Uzbek samsa is a hearty baked dish of Uzbek cuisine for holidays and everyday life, with various fillings to suit all tastes.

Do not confuse samsa and patty with meat. They are completely different things. While the relative similarity of ingredients they like each other less than pilaf and rice porridge.

History and origin of Uzbek samsa

The etymology of the word samsa is not completely clear. Perhaps this word is of Iranian origin. The Tajik sanbusa or sambusa, the Persian sambuse or sanbuse is translated as "patty cake", and goes back perhaps to the Persian sombole meaning "ear, spire ". Thus, the etymology of the word goes back to the term that refers to raw material (flour, dough), from which this dish was made. In that way, samsa, having emerged in the Iranian media, was developed in the environment of the Central Asian Turks.

It is not known exactly when this dish was appeared on the feasts, but mentions of miracle samsa were found during the reign of Gilgamesh - the ruler of Sumer, who lived nearly five thousand years ago. And Uzbek samsa recipe did not change.

Samsa can be prepared yourself at home, and it is very, very easy. So, let’s prepare Uzbek samsa.

Uzbek samsa recipes greatly enriched after the conquest of the territory of Central Asia by Russian Empire (1865-1917 years). For example, earlier in Central Asia flour of extra quality was not used, and only then it was delivered to the European population from Russia, as well as potatoes and cabbage. Nevertheless Uzbek samosa remains the unsurpassed dish of Uzbek cuisine. 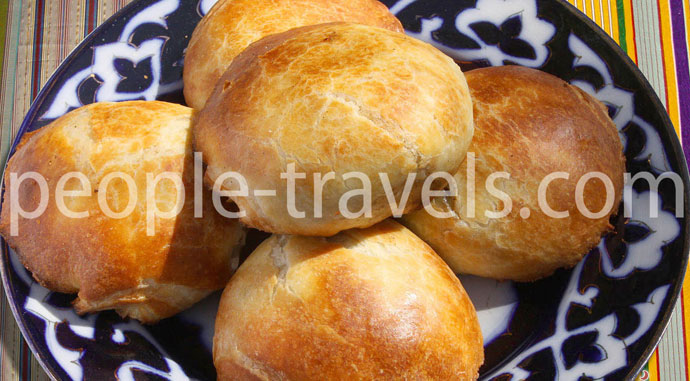 Today samsa is made with meat (lamb, chicken, beef) with vegetables (pumpkin, potatoes, onions), as well as with mushrooms, eggs, peas, greens and even sweet fillings. The final wizard taste of Uzbek samsa are spices that enrich the taste of the filling. They are zira, black and red pepper and sesame seeds.

Traditionally Uzbek flaky samsa is made of puff pastry and is baked it in Uzbekistan in the tandyr - the Central Asian-hearth furnace of special form.

Uzbek puff-samsa baked in the tandyr has distinctive and unique taste and aroma.

How to make Uzbek samsa

You should knead the dough, roll it into a ball, wrap in a towel and let lie for 12 - 15 minutes. Thin (1 mm) roll the dough into a large layer. Coat the entire surface with melted fat, twist roll. Cut the dough roll into pieces of 5 cm. wide and each piece roll in a short succulent. In the middle of each flake put a tablespoon of minced meat, place rectangular, oval, triangular or round Uzbek samsa and bake in the oven or tandyr. Mince is prepared as follows: chopped meat, add chopped onion, dress with salt and pepper, mix well and cook in a baking tray in a small quantity of fat, cool to frozen fat, and stuff samsa. When baking in the oven grease pans with oil and place in hot oven. The readiness is determined by a ruddy crust.

Previously Uzbek samsa was baked in the tandyr exclusively on coal - the taste and aroma of this samsa is indescribable! Uzbek Samsa today is baked in the tandyr.  It is a special sort, referred to herein as "samsa order." It differs in size, taste, aroma, it has a lot of sheep fat, onion, and, as a rule, whole pieces of chopped meat.

In settlements of Uzbekistan samsa is sold on the streets and in the markets, in kiosks, stalls and tandyrs, roughly the same as in American cities they sell hot dogs, and in the cities of Russia - pies

If you're in Tashkent, and want to taste the best Uzbek tandyr samosas, be sure to go to Bodomzar. Here are 12 species of Uzbek samsa: mutton samsa, lamb samosas, chicken samosas, samosa on the ribs, samosa with kazi, samosa with potatoes, samsa with pumpkin.

Under a small shed here is a huge tray, wrapped with a blanket warmer. You will come to a tray and smiling oriental beauty asks you, "what kind of samsa?" And you will say: "And what is there?"

And she will deploy a blanket and begin to enumerate: "samosa with mutton, beef samosa, chicken samosa, samosa on the ribs, samosa with kazi, samosa with potatoes, samsa with pumpkin ..."

And you will lose the power of speech from the golden splendor, opened in front of you on the tray, and in your head will be only one thing: "Give everything!"

Types of Uzbek samsa in different regions of Uzbekistan

In our glorious Uzbekistan, there are many varieties of Uzbek samosas, in fact, each region has its own samsa and in each region it is beautiful. The greatest love of fellow citizens are Jizzakh and Bukhara samsa. 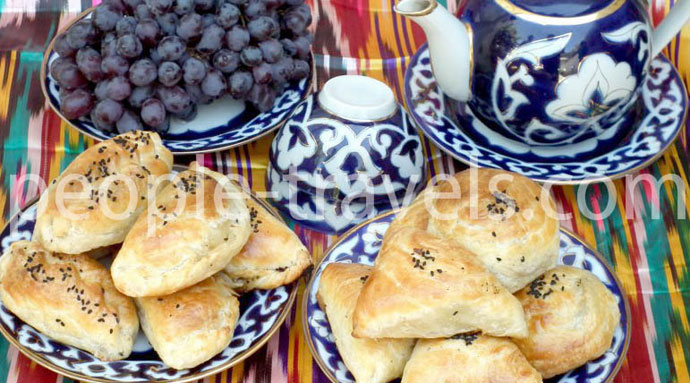 The recipes of Uzbek cuisine has sweet samosas stuffed with fruit jams. This dish is well served with tea. Whatever stuffing for samsa you choose - crisp and tender, it really melts in your mouth. To forget the flavour of this amazing Uzbek samsa is impossible!

Samsa is another world-renowned brand of Uzbekistan, production secrets of which are transmitted strictly within the family from generation to generation.

Eating Uzbek samsa from the medical point of view

It is scientifically proven that samsa is an absolutely "right" product. The natural fat in this product is the "good" cholesterol, making our blood vessels brittle, and not one that is on the walls in the form of plaques. And traditionally cooked in the tandyr, this dish is a little diet course. 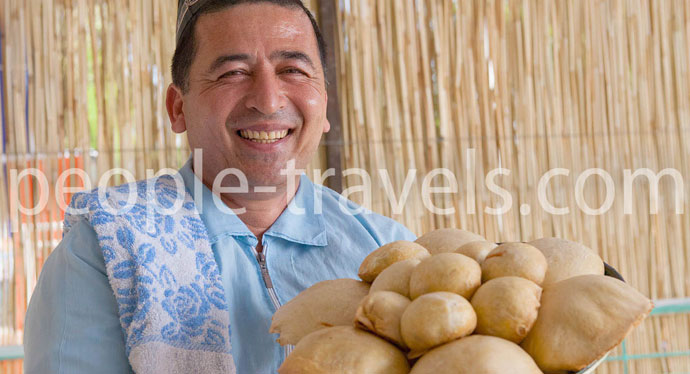 Peopletravel Company offers you wonderful nourishing tours to Uzbekistan where you will be able to taste Uzbek cuisine, at the same time, cognize Uzbek culture and mentality.