No one can count how many hundreds of centuries is the dish called "shashlik".

It is believed that as soon as Prometheus gave fire to all the nations, all of them at once learned to do shashlik, but all in their own way. It is known that in ancient Rome, and ancient Greece animals and birds were roasted wholly and dividing into separate parts. Of course, shashlik, in the first place - the invention of nomadic cattle-breeders. Despite the distinction of names in different nations, the point is one - skewer and meat.

Much water has flowed under the bridges since then. Eras, borders, customs were changing, haute cuisine was born, in which the aesthetics took up of satiety and practicality. Many recipes were forgotten and some completely forgotten, but not shashlik.

This dish has not got borders. It is prepared from Kamchatka to Africa, and each nation believes that its shashlik is the right one.

In Uzbekistan the art of roasting Uzbek shashlik succeeded no less than the skill to prepare pilaf. Not only a classic lamb, but beef, poultry, vegetables are in use.

There are disputes about where shashlik was first come up with and how to translate this dish. Here are some of the most plausible versions of the origin of shashlik.

“Shash” from with ancient Turkic means “piece”. And ”lik” means ”six”. As a result, shashlik - is six pieces of meat.

Uzbek shashlik, is mostly cooked this way. Pieces are of different sizes. It depends on the brazier. But the pieces are always six.

In view of the fact that the title "shashlik" is derived from the Turkic language group - Crimean Tatar word «şışlıq» the experts in the field of cooking theory believe shashlik the dish of the Turkic peoples. The word “Shish” in Turkic - "peak", "bayonet", “lik” - "for". Thus, "shashlik" in the literal sense is the dish, roasted on a spit.

As with other national dishes, each region of Uzbekistan offers its variants of preparation of this dish, and all regions do it exceptionally good. But the championship is rightfully Gijduvon shashlik. Gijduvon - a small district center, located near Bukhara . Gijduvon shashlik prepared here, is considered the best and unique. It is impossible to understand the secret of making Gijduvon shashlik, but the taste it has is very special and memorable. It is noted by all the people who tried it at least once.

The most popular Uzbek shashliks are lamb, beef and chicken shashliks. There are many variants, as the technology of preparations, and in shape, size and choice of meat portions. And there are Uzbek shashliks, surrounded by mysteries. For example, Samarkand shashlik of minced meat, which is cooked in the Samarkand region . And every resident of Uzbekistan ate Samarkand shashlik. But if you ask the Samarkand cook how it is grilled and what's the secret, you will get a lot of conflicting choices - so staunchly Samarkand dwellers keep their secret shashlik recipe.

Uzbek shashlik is roasted on embers. The most delicious Uzbek shashlik turns on an old vine, the branches of apricot or cherry. The aroma from the smoke of the coal is itself a spice. Generally it is best to take the wood of fruit trees, but conifers are not suitable for Uzbek shashlik.

There are some more Uzbek shashlik types.

It is very popular in Uzbekistan shashlik. In any dining hall one can often hear the question: "Zhigar bor-mi?" - "Bor Bor" This means: "Is there shashlik of liver"? - "Yes, there is." This type of Uzbek shashlik is often prepared from beef liver with mutton fat.

Zhigar-kabob - salvation for hypotensive patients. It is most difficult to prepare this shashlik. It is important not to dry, and at the same time be sure to fry liver thoroughly.

Uch panja kabob or shashlik "Three fingers". It is Uzbek shashlik kebab on a few sticks. It is crisp, fragrant, delicate, really melting in the mouth.

This Uzbek shashlik is called such a way because at the same time it is put on three skewers resembling three spread fingers. The history of this Uzbek shashlik is out in antiquity, when the herdsmen stored up the hay for the future. Not to carry the skewers in the field, they strung the meat on a pitchfork and thus fried shaslik. 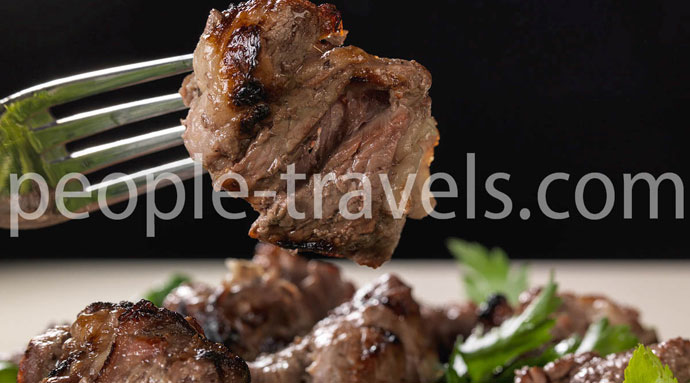 Kiyma (milled shashlik) - one of the most popular options in Tashkent . It is soft, meringue, mostly made from beef. "Kiyma" in Uzbek means "minced meat". The same word is used for meatballs.

This type of shashlik was always considered a delicacy even on the richest feasts. In ancient times it was available mainly to hunters and very rich people. And nowadays anyone can treat yourself this dish and feel padishah, because modern markets abound with gamebird.

Dandan kabob or shashlik of brisket of young lamb.

This Uzbek shashlik is one of the most delicious, tender, delicacy dishes of the Uzbek cuisine, for what it was deservedly called "the shah's kabob." The main rule of the pork shashlik is not to overdo it with the marinade. Loin itself is very tender and tasty meat, therefore one should marinate it immediately before cooking.

"Gul" - in Uzbek - "rose" It is the type of Uzbek shashlik where meat is rolled into a roll, resembling a rose. Each fragment of such kabob is a structure of elastic meat, with the subtlest layers of fat. The same layer of crispy fat already covers the sidewalls of the roll. One bites a piece of gul-kabob and at the center of the roll he tastes hot dumba - fat of sheep's tail.

There is another popular option of Uzbek shashlik - kazan kabob. This is meat cooked in a cauldron by large pieces together with vegetables, which are usually not cut but put as a whole. The meat thus has unusual taste, because a special method of preparation is used. It is not quenching, frying and boiling, but any mixture of these types of thermal treatment.

The classic Uzbek shashlik is a dish of shallow meat, usually lamb with a minimum of spices.

As during Soviet times, it was impossible to get the lamb meat in the store, the cuisine adapted to the available raw materials (beef, later poultry and fish). And so it was decided to marinate the meat, in order to impart softness.

Traditionally in Uzbekistan shashlik is marinated in water. Yes, in ordinary boiled cold water, however, sometimes mineral water is used. A small amount of water, plus salt, pepper, spices and sliced onions is the most correct marinade.

But today is the 21st century. Things change, and ways of cooking in the cuisine are no exception. The basis for the marinade in Uzbekistan can also serve wine vinegar, pomegranate juice, lemon, dry white wine. Currently brandy, beer, cherry juice, soy sauce, fermented milk products, mustard are added. In the East, the marinade is not complete without spices: zira (cumin), coriander in any form, sage, basil, peppers, onions, and a large number of different greens.

Shashlik is responsible affair. It's not as easy as it seems at first glance. Everything is important - the temperature of the coals, time of marinating products, and careful preparation of meat.

For 1 kg. of meat we need 2-3 onions, 1 teaspoon of salt, red or black pepper, coriander seeds, 4 tablespoons of wine vinegar.

The flesh of mutton or beef cut into pieces of 10-12 grams, salt, sprinkle with ground red or black pepper, add chopped onions, coriander seeds and vinegar, mix all well.

To better marinate lamb for Uzbek shashlik, fold it into an enamel or porcelain dish, on top put load, cover with cheesecloth and place in a cool place for several hours (from 4 to 24 hours).

Then remove the meat from the marinade, strung by 6 pieces on skewers (the last one should be a piece of fat). Roast over coals until a red crust.

To fry the meat evenly, from time to time turn the skewers.

The ready Uzbek shashlik is served on a table with finely chopped onions, seasoned with cumin. You can serve up also tomatoes, cucumbers or any salad.

In Uzbekistan shashlik has a special place. In Uzbekistan it is eaten almost every day for lunch to shurpa or pilaf. Tashkent dwellers know well where the excellent Uzbek shashlik is served. What can we say? In the East, the great significance is attached to meal. The real Uzbek shashlik is cooked as soon as the guest is sitting at the table. While he is drinking tea and resting, masters-cooks strung pieces of meat and sheep fat on skewers.

When you arrive in Uzbekistan within the tours of Peopletravel Company, do not hesitate to ask oshpoz (cooks) the secrets. The Uzbeks are generous people; they sure will share their secrets of cooking skills. Uzbek cuisine is a special national brand that is conquering the world.

Shashlik in Uzbekistan is an obligatory dish in all cafes, ethnic restaurants, and other places of public catering. And in any place you will be served more than one form, and a whole range of different types to choose from. And despite the fact that the dish is one of the oldest, its popularity in the modern world is growing every day.

By the way, from time immemorial in Uzbekistan near the barbecue are exclusively men. Women are admitted to the solemn performance only at the stage of cutting and marinating products. According to professionals (again men), there are several aspects necessary to prepare this wonderful dish: good meat, the "correct" marinade, right wood, and, of course, skills of shashlik cook

And the places specializing in the preparation of shashlik in Uzbekistan are called kebab or shashlik houses.

It is impossible to imagine Uzbekistan without the sun cakes, hot pilaf and, of course, without a delicious Uzbek shashlik. Smoke, soaked with aroma of meat roasted on coals, is carried away from the shashlik house, seductively luring gourmets. The seller of the kebab house do not even need to entice customers with loud exclamations, shashlik flavor will do it itself, and much more efficient.

Be sure to visit kebab house in Uzbekistan. Here you can appreciate the most vivid and delicious colours of Uzbek cuisine.