He who tasted the real oriental dish with slices of meat, rice and spices called Uzbek pilaf (or Uzbek plov, palov), he will not forget its taste and aroma ever.

Lamb pilaf is a king of the Uzbek national cuisine. Uzbek plov, the cooking method of which was invented in ancient times, can also be called a culinary masterpiece. 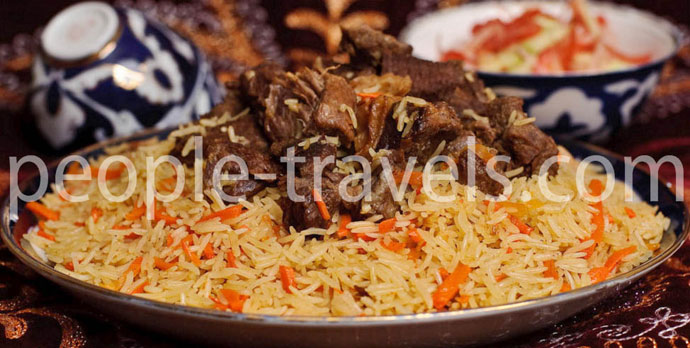 A newborn or the deceased is met or paid last tribute with traditional Uzbek pilaf. National Uzbek dish pilaf is prepared for a wedding, meeting the guest of honor, anniversary, and just for the family for dinner.

The real Uzbek plov as a dish is an amalgam of two ingredients: the so-called "zirvak" and part of the cereal.

Here are some useful advices of how to cook Uzbek pilaf.

Rice is washed completely and sometimes soaked in water. In the hot cauldron the fat of sheep's tail or vegetable oil is much warmed up, until a white fume; and then cooking of zirvak - bases of Uzbek pilaf rice recipe starts. First, in the boiling fat onion is fried, then pieces of meat are put. For Uzbek pilaf, depending on the recipe options, one can use mutton and goat meat, and beef. Meat is fried, stirring with a skimmer, until browned, then the carrots is laid, it is lightly fried, then water is poured into the cauldron and zirvak is stewed on low heat. Ready zirvak, seasoned with salt, red pepper or chilli, zira seeds (local relish) and dried berries of barberry, should be clearly and give a sense of the whole gamut of taste of fried mixture of onion, meat and carrots. 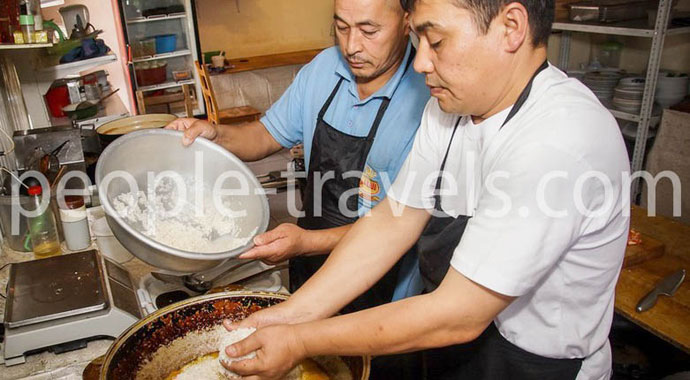 The best rice for Uzbek pilaf is devzira - ancient local variety of rice, created by centuries of folk selection. From historical records it is known that in the X - XI centuries, in the era of the Samanids in the court feasts pilaf from devzira rice was used. This rice is cultivated in the Fergana Valley, mainly on private land of farmers, since it is considered to be unproductive fodder and unfit for cultivation on large plantations. However, low yields of devzira offset by choice quality of Uzbek pilaf. Its oblong ribbed grains of pink color have high water-absorbing properties. They contain less starch, but superior to other varieties in the number of vitamin B2 and choline.

Also another local breed of rice - kbugdayguruch is good for cooking Uzbek pilaf. Before laying in pilaf, these large white beans with pearl shade should be soaked in warm salt water.

Rice is laid on meat and carrot and is filled with water so that the level of water is at the height of "the first joint of the index finger" of pilaff cook.

In real Uzbek pilav rice should be crumbly, its grains should be soft and do not stick to each other. To bring pilaff to readiness, rice is knobbed in the middle of the cauldron and the cauldron is covered with a special ceramic lid or large deep dish and fire is minimally reduced. The experienced chef determines the readiness of pilaff, hitting the skimmer on the boiler wall. If the moisture of the rice is not fully evaporated he hears hissing, when the dish is ready - there is a dull sound. Uzbek palov is served on the table in lagans - large ceramic or porcelain dishes. Pieces of meat are laid on rice, and all is sprinkled with fresh chopped herbs. In ancient times, on weddings Uzbek pilaf was served to each guest separately on cakes (Uzbek flat bread).

So, we looked at different options of cooking Uzbek plov for every taste.

Uzbek pilaff recipe, although arose empirically, but it is very rational dish, because it combines the substances indispensable for the normal functioning of the human body: proteins, carbohydrates, fats, water, minerals and vitamins. It is important for a balanced diet. Such nutrition involves a combination of a sufficient number of high-grade in quality food components. It ensures the supply of plastic, energy and regulatory substances. All of them are necessary for normal human activity. Use of nutrients by the body that is the digestibility of food depends on their combination.

In the old days pilau was considered a curative nutrition. Indeed, the lamb and rice pilaf is a high calorie, easily digestible food. It can be well used for anemia, tuberculosis and general exhaustion.

Uzbek pilaf, cooked from rice with high coefficient of water absorption, has especially good digestibility. The higher it is, the more rise is swollen; it is better and faster digested in the gastrointestinal tract.

Designing and feeding of ready Uzbek pilaf on the table are indicative of the specific characteristics of the national cuisine. Uzbek pilaf is usually served in one dish, combining portions of two, four, six or more persons. Utensils are round, large, flat with low sides of porcelain, earthenware, pottery dishes. Uzbek pilav can be served as individual portions in the plates, large soup bowls-kasa or non-metallic bowls. In ancient times, on weddings Uzbek pilav was served to each guest individually on Uzbek cakes. Occasionally, this custom is still used today. For this purpose, round cup-shaped cakes with thin means and lush boards were specially baked. This form of bread preserved to this day.

Vinegar, sliced radishes, garden radish, pomegranate seeds, strawberry, blackberry, fresh salads from tomatoes, cucumbers and onions are served separately with pilaff. After eating pilaff one is served thickly made green tea and in Tashkent it is black.

The Uzbek pilaf in Tashkent, Samarkand, Fergana, Kashkadarya, Bukhara and Khorezm is different; and the experienced connoisseur of the Uzbek ethnic cuisine with closed eyes will determine what type of Uzbek pilaf is. In addition, there are different Uzbek plov recipes by appointment: wedding pilaff is considered to be the most luxurious, festive pilaff is a little less grand, and simple pilaff is served at the table in a very ordinary day. These Uzbek pilafs differ not only in cooking technology, but also ingredients.

After years of collecting material on the Uzbek cuisine it was able to establish dozens of options for cooking Uzbek pilav. Methods of preparation of some forgotten recipes were restored and included in the list of separate newly created Uzbek pilaf recipes. Talks with the old and hereditary masters of national cuisine of the most diverse cities and villages of Uzbekistan helped in it.

Written sources of varieties of Uzbek pilaf have not yet been detected. However, according to oral reports of our interlocutors, the range of this honorary dish exceeds a hundred. Each area of ancient rice cultivation, each city had its own, unique to this area, preparation methods, each cook of pilaff had his secrets in the recipe and technology. Thirty-five years of intensive searches made possible to establish 60 varieties of pilaff: meat and chicken with peas and potatoes, steamed and with mutton sheep's tail fat, with quince and garlic ... Vintage Uzbek plov recipes with partridges or raisins preserved invariably from the X - XII centuries, and some methods of cooking "classic" rice pilaf number thousands of years.

History and legends about Uzbek pilaf

Uzbek pilaf is the pride of the Uzbek people, which became a symbol and a distinctive hallmark of Uzbekistan. But how did this dish, which now is a global brand, appear? In this regard there are several legends.

Initially pilaff appeared in the kitchen of the shepherds and nomads of Central Asia, who were engaged in cattle breeding and meat trading on rice cereal.

One of the most romantic legends tells that the son of the Bukharian ruler fell madly in love with beautiful woman from a poor family. He was a prince, and she was just a daughter of a handcrafter, and according to the edict of that time they could not be together. The prince, tormented of unrequited love, began to fade quickly; he lost appetite and sleep, and refused food.

Near relations concerned about the condition of the young man and brought him to Abu Ali Ibn Sina. Inquiries about the causes of the disease yielded no results: the prince did not wish to reveal his heartfelt feelings, realizing the despair of his anguish. Then Ibn Sina began to define the cause of the sickness on the pulse. He could definitely identify any disease on the patient's pulse. The heartbeat of the young man pointed to love flour.

The mystery revealed: the prince was in love with the daughter of an artisan. With this knowledge, Ibn Sina appointed treatment: to give emaciated boy "pilaff osh" once a week as long as not recuperate, and then get married. And indeed, the young man soon recovered, he married his beloved and spent a happy long life.

About Uzbek pilaff: mystery of each letter

The dish was nameless, and to give it a name, people decided to just call it with the first letters of 7 ingredients. And so the dish "plov" or “pilaf” appeared.

No wonder even Amir Temur included Uzbek pilaff lamb in the main menu of his soldiers. One day, developing a campaign plan for Ankara, he attended to an important issue: how to combine numerous army, long road, speed, surprise attack, and thus dispense with huge carts with food. Here the wise Mullah told him the recipe of this unusually tasty, wholesome, and nutritious meal. His words sounded like this: "You have to take a large cast iron pot. In this boiler you should put the meat of not old, but not so young lambs, rice, swelling with pride, which will be eaten by bold warriors, young carrots and onions, stinging like a sword of the esteemed Emir. All this is necessary to cook on the fire as long as the smell of cooked food will not reach Allah, and the cook will not fall down in exhaustion, because he will taste the divine dish". From one cup of food the soldiers gained strength for a few days, and Tamerlane's army won a victory without difficulty. Since then, Uzbek pilaf became the main meal of Amir Temur’s loyal army, and perhaps one of the main secrets of his victorious campaigns.

Earlier in poor families Uzbek pilaf was really a very festive and expensive dish, and saying just emphasizes the great taste qualities of pilaw. In the representation of peasants a rich man could afford this dish every day. Secondly, the constant food of farmers in Uzbekistan was often limited to vegetables, legumes and sour milk, so it is not proper to attribute the constant use of this expensive dish.

Another Uzbek proverb says: "If one has to die - let it be from Uzbek pilav". This proverb once again confirms the fact that the Uzbeks and other nationalities are so fond of rice, that they are ready to eat it in large quantities. So it is loved and respected - a dish-king of Uzbek cuisine.

Peopletravel Company is eager to help you in accomplishing the trip round Uzbekistan, and emerging the wonderful atmosphere of Uzbekistan, as well as tasting the popular Uzbek pilaf.

Please choose the suitable tour to Uzbekistan and our company’s employees will help you in order your travelling is wonderful and peculiar.