Manti or manty - a traditional meat dish of the peoples of Central Asia, consisting of finely chopped meat in a thin dough, cooked under steam.

Origin of the word “manti”

The word manti comes presumably from the Chinese "mantou" "stuffed head", or, as a homonym, "the head of a barbarian". And cooking of manti in Cninese symbolizes a ritual of human sacrifice to the spirits. This ritual was invented in ancient China by one of the Chinese military leaders.

It is surprising, but to the XX century, (in current interpretation) nobody in Uzbekistan heard about manti. Uighur and Dungan settlers brought manti with them. Uighurs inhabiting China cooked a dish called "mantou", which according to some sources literally meant - "steamed bread".

Gradually, manti recipe began to spread to the East, and then to the whole territory of Central Asia.

In Uzbekistan manti are very popular and common dish, steamed out of the delicate fine dough with juicy meat filling inside. As a rule, Uzbek steamed dumplings – manti are servedfor lunch or dinner. In Uzbekistan hot and still steaming manti are served on a large colorful lagan (platter), and one takes the right amount of it. Most of the dishes of Uzbek cuisine supposed to eat with your hands, manti are among them. By the way, it is quite difficult to eat manti with covers, so after a few minutes you will understand that eating manti with hands not only convenient, but also much more delicious - juicy stuffing does not fall out, but remains with the juice inside manti. Therefore, if you are invited to visit Uzbekistan and served Uzbek manti, safely eat it with hands - it does not violate the etiquette.

In Uzbekistan there is one of the oldest cities in the world - Bukhara, in which local chefs cook real Uzbek manti from lamb. Any self-respecting Bukharian chef makes the national dish of Uzbek cuisine exclusively with hands without the use of any modern gadgets.

Only the Uzbek people could preserve the age-old recipe of classical uzbek manti and offered an alternative to the Chinese bamboo lattices, on which dumplings were cooked. Yes, this tableware, called manti-kozon (cauldron for manti) or "mantyshnitsa" was born in Uzbekistan.

Uzbek manti is one of the many dishes of Uzbek cuisine, which gives scope for the irrepressible imagination of cooks. Only the composition of the dough is in fact unchanged, and stuffing safely varies depending on the season and taste preferences. So, stuffing can consist of meat, potatoes, greens, turnips, tomato, sweet pepper, and even there is manti with pumpkin. The main thing, that onion and dumba (fatty tail) would be always on hand in abundance.

However, the recipe of uzbek manti, assuming a part of minced meat, onions and fatty tail is really the most favorite, widespread and commonly used.

Uzbek manti with mutton and onions is a holiday not only for the stomach, is a feast for the soul! A large dish of flavored envelopes of the finest dough in the middle of the table, the noise and hubbub, sour cream, bowls with hot tea and arms, stretching for a new portion of Uzbek manti.

Uzbek manti from the medical point of view

Uzbek manti are made under steam, which is important in ensuring the usefulness of this dish. This technology allows, firstly, the complete safety in the process of cooking all the food components, and secondly, despite the high caloric content, Uzbek steamed dumplings  are easily digestible.

For good Uzbek manti with meat inside you need good meat, fat tail and onions, in the number equivalent to the meat. Meat for Uzbek manti is not ground but chopped! And it is necessary.

How to Cook Uzbek Manti

Below there are several steps of how to make delicious Uzbek manti. Keep to the established advices and your steamed dumplings will be real Uzbek manti.

Knead the dough, as well as for other flour Uzbek dishes, let the dough "lie down", after covering it.

Half a piece of the dough should be rolled out in a large thin sheet, trying to give it a square shape to reduce the number of substandard scraps.

The rolled out layer we put in the form of an accordion so as to obtain a rectangle of 4 layers. Cut the folded dough into equal squares. As a result, we obtain four long strips of equal width, about 9-10 centimeters.

Repeat all manipulations with the second half of the dough. Impose strips on each other and we share them into equal neat squares.

Now you can start sculpting of Uzbek manti. In the middle of a square of each piece of dough we spread the stuffing, potatoes, and then a few pieces of fat. Put together the opposite corners of the square. Then, pinch together the edges. 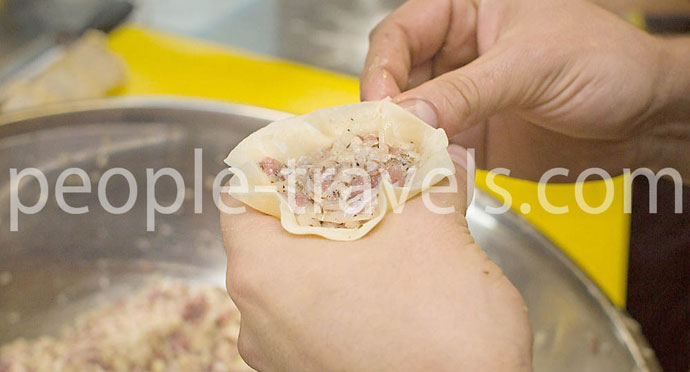 The ready manti are spread on a sheet of mantovarka (cauldron for manti) greased with oil.

Before direct cooking of Uzbek manti, you should fill the bottom pan of cauldron with water and put it on the fire to make it boil.

The result, delicious and very juicy real Uzbek manti, which will be appreciated at true worth.

In Uzbek cuisine manti are served hot with various sauces or sour cream.

Don’t miss the opportunity and book tours to Uzbekistan. Here are many advantages of tasting Uzbek cuisine, feel the aroma of the East and be immersed in the Uzbek fairy tale.