Along with pilaf and shashlik, Uzbek lagman is considered one of the main national dishes of Uzbekistan. This fragrant Uigur, according to other sources, Dungan dish won the recognition of the majority of the Central Asian peoples and Uzbek talented chefs added its own original ingredients.

The name "Lagman" is derived from the word "lyumyan" translated from Dungan to "stretch the dough." It reflects the main feature of cooking lagman: homemade dough for noodles, which is put in the soup, specially rolled and hand-drawn.

It is difficult to say specifically to which dishes lagman in Uzbek is regarded - first or second. The consistency resembles a thick soup or noodles with abundant sauce. 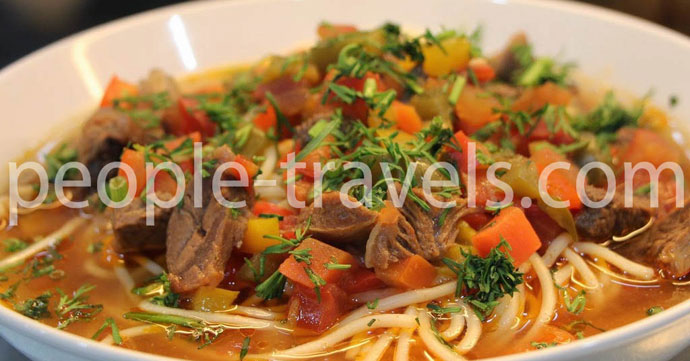 With a large amount of broth, lagman Uzbek food is more like a soup, with other cooking methods it looks like noodles with gravy and difficult stuffing.

Do you want to learn how to cook the Uzbek soup lagman, but there are no real chefs from Central Asia among friends? No problem. You are lucky and on our website you will receive a recipe of Uzbek lagman.

The secret of Uzbek national food lagman is in right noodles. It is pulled out of the tough elastic dough, but in any case it is not shredded, as many people think! To cook the noodles for Uzbek lagman, you will have some work to do, but the result is worth it, and you will see for yourself.

So, for lagman – Uzbek chowder you need:

Delicious lagman in Uzbek: how to make gravy.

While the dough comes to the condition, you can take gravy - vodzha (Uzb.).

To make the gravy for Uzbek lagman you need:

To cook the authentic lagman Uzbek soup, the recipe advises to take a thick-walled kettle. The skillet or cast iron pan with high sides will be suitable. You should kindle the animal fat, fry the meat, subculture the onion, adding here the garlic, bell peppers, tomatoes, eggplants, potatoes and radish. Preferably if you cut all uniformly on cubes, because Uzbek noodle soup lagman is not only delicious, but also a beautiful dish. When the gravy ingredients are brown you should fill it with water, bring to a boil. Add the spices: star anise (or anisetree) - certainly, cumin, red pepper, kinza (coriander), salt and other spices to taste. Add the cabbage. The gravy for Uzbek lagman you should simmer over low heat until readiness.

While the gravy for our Uzbek lagman is quenched, we will pull the dough for noodles. The dough is smeared with a solution of salt and baking soda diluted in water, punched to absorb the solution. Small pieces of dough are rolled into the form of pencils. Each such "pencil" is oiled and stretched to about a meter. To do this, the wiring is taken at both ends and stretched mid hitting the table. The meter of noodles is folded in half and the stretching is repeating. 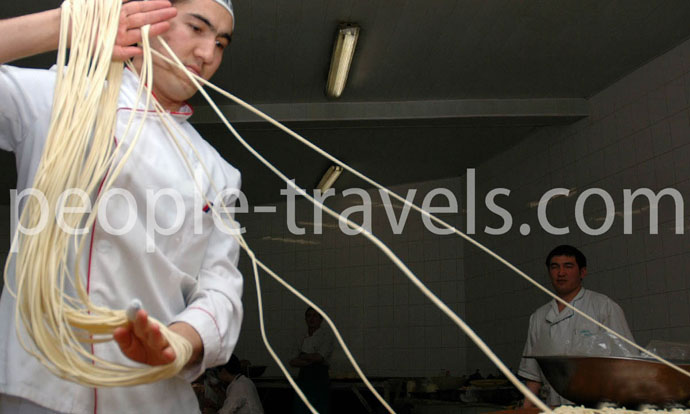 The event with noodle is victoriously completed by its cooking in boiling salted water. Ready-made noodles for lagman in Uzbek is leaned back in a colander and rinsed with cold water. But while noodles are stretched, the sauce is almost ready. You need just combine these components.

When serving, cold noodles should be boiled with water and poured over the sauce, generously sprinkled with greens and finely crumbled with garlic.

Now you know how to cook the Uzbek soup lagman, which, by right, can be the proud of Uzbek cuisine.

There are several types of Uzbek lagman: kovurma lagman (dry) and the usual one - with plenty of broth.

Some people believe that this delicious dish comes back to China. There is a legend, which opens our eyes to the origin of this dish. The following beautiful story familiarizes with the history of lagman.

One day, at the intersection of two roads three travelers met. Each went his own way and each of them had his own purpose. But there was something they had in common. This something was called hunger. Yes, hunger forced them to stop and decide together how to satiate themselves. Each of them had one subject; one traveler had the Chinese pan - vok, the second traveler had a bit of meat and flour, the third one had a bit of vegetables, namely, radish and a little spice.

According to historians lagman is a native dish of the Dungans. The Dungans actively inhabited the territory of ancient China. Due to the large migration of this people lagman gained popularity among many nations.

So, to taste the real Uzbek lagman be in a hurry and order tours to Uzbekistan with Peopletravel Company. Our workers will do the best your journey is nice and unforgettable.