We offer you a virtual gastronomic journey to hot Uzbekistan; and cook delicious national dish of this country – Uzbek hanum.

Hanum (or khanum, khanym, hanon – various spellings) – is not only the one name of the fare. In the Fergana valley it is called urama, which is translated as "bundle" or "wrapped", on the method of cooking Uzbek hanum, but in the Andijan region this dish is called hanum, like in Tashkent.

Generally, Uzbek hanum on stuffing and cooking technology is very similar to familiar manti. In part this is a fair point, especially as the recipes of Uzbek hanum and manti are somewhat similar. And some people even call Uzbek hanum "lazy manti". But this is not quite true, because a too lazy man does not make hanum.

Yet Uzbek hanum is hanum. This dish is original. The filling for Uzbek food hanum is different: vegetables or meat. There are also differences in the cutting of the filling. For example, in Tashkent the stuffing for hanum is often cut into small strips, and in the Fergana Valley - cubes. In Tashkent, the hostesses add to the stuffing the grated carrots, making it brighter and more distinctive.

Hanum Uzbek dish can be in the form of rose flowers, it is called "gul-hanum", which is translated from Uzbek "flower hanum".

Let's start with the dough. 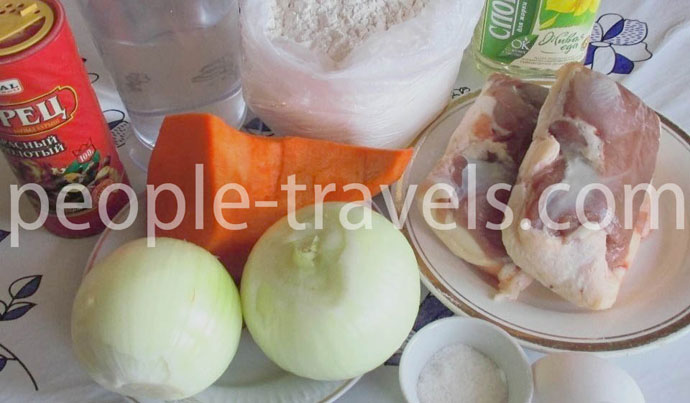 For the filling we will take onion (two small or one large), tomatos (two pieces), herbs: dill, parsley, onion to taste, garlic (two or three pieces). You can add coriander. And here's another little trick: while cooking Uzbek hanum it is necessary to use (zira) cumin - the highlight of Uzbek dishes! 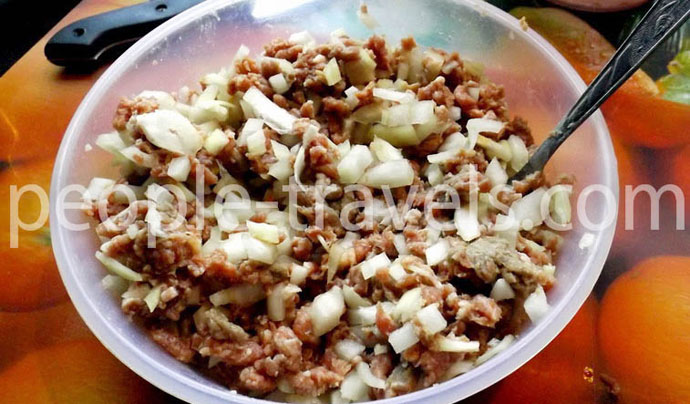 How to cook the stuffing for Uzbek hanum? We need a deep bowl in which we crumble onions, salt it and mix. We add julienne potatoes to the onion and stir it again.

Then overcook the cut into cubes onion until almost the readiness, add the tomatoes and simmer for more 10 minutes. In just a few minutes until cooked add the chopped dill and parsley. Do not forget the coriander and cumin! After that, seasoning can be considered finished. It will be the cover of our Uzbek hanum.

Uzbek hanum is steamed 45-60 minutes in mantyshnitsa (cauldron for manti) or in multi-pan.

Serve Uzbek steam roll with meat hot, sprinkled with greenery, with a fragrant sauce of tomato or cream sauce.

The Uzbeks are often asked how to eat hanum. True fans of Uzbek hanum assert that when using knives and forks a true taste of the dish is lost. Especially in Uzbekistan hanum is traditionally eaten with hands.

There is a legend of the origin of this dish. It is more like a joke, but nevertheless. One Uzbek woman knew of her husband's return from the war. Her joy gave way to concern and sadness - her husband liked manti very much.

The woman really wanted to meet her husband with the delicious treat, but physically she could not be in time to make manti, and then she simply unrolled a large cake and wrapped stuffing in it. And so hanum was born.