Arriving in a new country, everybody wants to feel the national colour of this or that country. So, one component that gives Uzbekistan a special ethnic flavour is Uzbek cuisine. 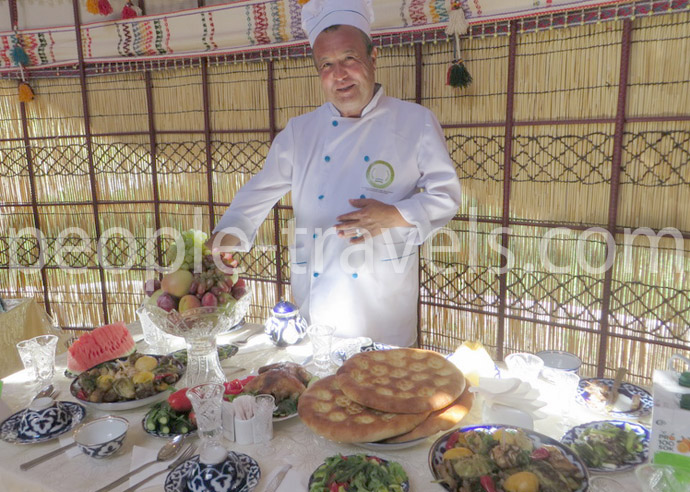 It is an impossible task for a tourist to fully enjoy the Uzbek feast. The rich list of Uzbek dishes is amazing the untrained imagination of the traveler. Several nourishing Uzbek national dishes for a meal is the common hospitality for the Uzbek man.

If you are eager to know Uzbek culture, taste the Uzbek cooking.

A variety of Uzbek national dishes impresses with its unusual quantity and amazing taste.

Everyone who has been in Uzbekistan, is immediately known such dishes as Uzbek pilaf, samsa, shashlik, manti, shurpa, lagman, khanum and many others.

Pilaf is a national dish of Uzbekistan that is cooked from rice, carrot and meat. Depending on the region of Uzbekistan such components as peas, garlic, barberries, quince, dried apricots and raisins are added to this delicious Uzbek national dish. Traditionally Uzbek pilaf is served hot on a large dish. Pilaf is washed down with tea, eaten with salads. Sometimes pilaf is eaten with patyr (type of Uzbek bread). But such eating is for rare eater.

The main difference from other pilaf dishes is not the composition of the products but the technology of preparation. Depending on the method of preparation, pilaf is always different, but equally delicious.

Samsa is considered a separate traditional Uzbek dish of flour, which the Uzbek people can cook almost from any product, depending on the season. But traditionally Uzbek samsa is baked from flavour with different kinds of meat.

Traditional Uzbek samsa is cooked in tandyr (Central Asian stove). But there is also a kind of samsa (usually triangular and square shape), which is prepared in the electric and gas ovens.

It is amazing, but, samsa is considered to be an absolutely correct dish, cause it is steamed in tandyr, without frying, that makes samsa health food. The natural fat in samsa is the most "useful" cholesterol, which makes our blood vessels strong.

Talking about shashlik one immediately imagines sappy flavoured meat on the skewer. The traditional Uzbek shashlik is cooked from mutton, but it also can be prepared from beef, poultry, chicken and fish. This dish is very delicious and nourishing at the same time.

Almost in every café, restaurant or even chaykhona (traditional Uzbek place for drinking tea) you may taste shashlik. Preparing shashlik is very delicate work, and exactly in Uzbekistan you may enjoy the unforgettable taste of Uzbek national dish - shashlik.

Manty - traditional dish for Uzbek people. It is the pieces of meat wrapped in thin dough. The main feature of manty is that the dish is definitely steamed. So the dish keeps a great deal of useful properties. As many other Uzbek traditional dishes, manty is very tasteful and nourishing cooking.

Manty - the dish that is eaten by hands. The dish is often served with sour milk or fried onion.

Shurpa is a meat bouillon, which is widespread in Uzbekistan as a first course. In Central Asia and in Uzbekistan particularly shurpa is a symbolic dish. Shurpa is not only amazingly delicious, but also therapeutic cooking at the same time. It has restoring, stimulating and even relaxing features. Traditionally shurpa consists of meat, vegetables and various spices. 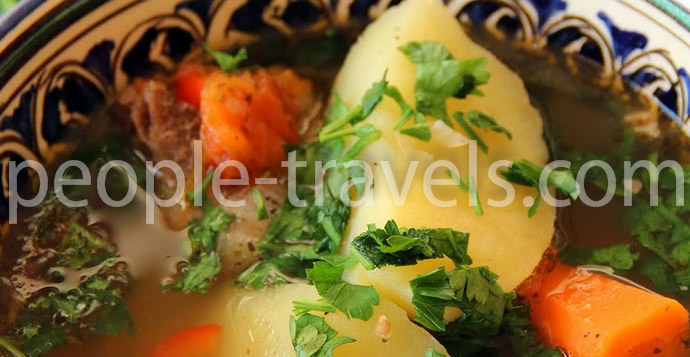 In Uzbekistan there are two types of cooking shurpa. They are kaurma (fried shurpa) and kaynatma (boiled shurpa).

From the above we can say that shurpa is the property and loved national food of Uzbekistan people and guests of the country.

Lagman is a kind of cooking that can be attributed to both the first and second dishes. Lagman consists of meat and vegetable (main) part, called vadzhi; and noodles. Noodles in lagman plays the role of the main distinguishing feature.

Usually lagman is served in deep plates (“kosa” in Uzbek) and such ingredients as sour milk (“katyk” in Uzbek) and greens perfectly complement the dish.

The traditional Uzbek dish Khanum is cooked from meat and dough. It is also can be described as meat loaf, that is steamed. Khanum is served on a table with vegetable sauce and sour cream. In Uzbek national cuisine there are many different kinds of cooking khanum, depending on the region of the country.

Uzbek traditional cooking may be different in various regions of Uzbekistan. This is due to the fact that culture of neighboring peoples influenced a significant impact on the diversity and originality of the recipes of Uzbek cuisine.

Plan your trip to Uzbekistan with Peopletravel Company. We will provide the best holiday time in Uzbekistan, where you will get unforgettable impressions for long memory.

Traditions and etiquette of Uzbek food

Firstly, Uzbek people are very hospitable, and you will please an Uzbek man, if you accept an invitation to taste Uzbek national meals. Having come to Uzbek house, you will be offered to taste Uzbek cooking, and a seat away from the entrance that is considered a great respect.

Traditional food in Uzbekistan begins from tea. And don’t be astonished and upset, if you find out little tea in your cup. According to Uzbek hospitality the more respectable guest, the less tea is poured into the cup, because regular pouring tea is regarded as care about the guest.

Bread is of great respect in Uzbek national cuisine. It is always on the Uzbek dastarkhan (decorated tablecloth among the peoples of Central Asia). Patyr (type of Uzbek bread) is required to put "face" up. The eldest member of the family may break patyr. And only after this the rest of the family can start meal.

In Uzbek culture it is normal when a man cook meals. Moreover, there is a special name for professional men cooks – oshpaz. Oshpaz is literally translated as an expert in cooking pilaf

In general, Uzbek cuisine is a real universe, a journey which can take a lifetime, and it will be one of the best possible travelling. Having booked the tour to Uzbekistan, you will have a great opportunity to taste Uzbek traditional meals full of Eastern delicate smell and inimitable peculiar flavour.