Geography and climate of Uzbekistan

The geographical placement of Uzbekistan, which is located away from the oceans and seas, in the inner part of the Eurasian continent, causes its continental climate. The continental climate is expressed in cloudless weather in most of the year, in a high temperature in summer, in a small amount of precipitation in large evaporation of moisture, in the summer hot and duration, as well as the relatively cold winter in these latitudes, in large amplitudes of daily and annual air temperature. These features of the climate in Uzbekistan were influenced by climate generating factors. 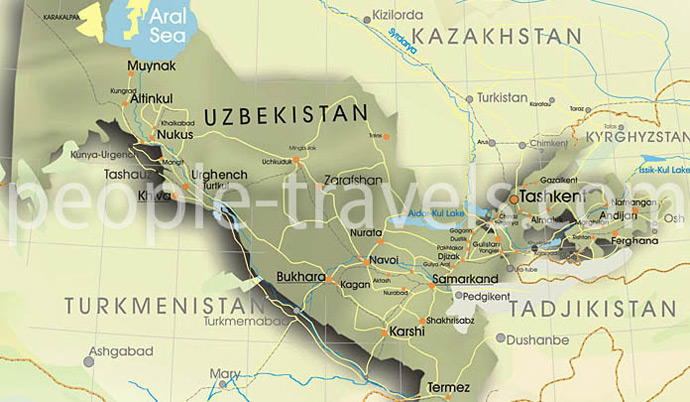 Uzbekistan is a sunny land, filled with warmth and light. It is typical for this region the high solstice throughout the year, as well as an abundance of warm and sunny days. Indeed, the number of sunny days in a year is more than 320.

About summer in Uzbekistan

During the summer, the duration of the day is up to 15 hours, and in winter - about 9 hours. In summer on the flat part of the country there is a local turan tropical air mass. The air is dry and hot, and saturated with fine dust. The weather in Uzbekistan is resistant, the sky is always clear, cloudless; day is very hot, but it becomes cooler at night. The hottest 40-days period, called by local residents “chilly” continues from June 25 until August 5.

Here the area of a low pressure is formed that favors the penetration of the warm and more humid air from the north-west and west. However, the air quickly gets warm, and there is no precipitation.

Mountains, located in the eastern part of the territory, retain the humid air masses, resulting in the foothills and mountains precipitation falls. In summer, climate of Uzbekistan is cooler in the mountains, and there are more rains, winters are cold and prolonged, snow falls a lot. High in the mountains snow lasts all year, forming glaciers.

This season in Uzbekistan the weather is still warm and is does not much differ from summer. Therefore, the beginning of autumn is considered to be in October. Since that time, the weather in Uzbekistan begins to change, the days become shorter, the temperature is lowered. Sometimes frost falls at night. Infrequent rains occasionally pass into snow. In autumn there is 15-25% of annual precipitation. Fall starts earlier, cold weather comes faster in the mountains.

When the average daily temperature drops below + 5 ° C, this is the end of the fall.

In winter Uzbekistan weather is hardly severe, rather warm with a few exceptions. January is the coldest winter month. Often in the morning the streets are veiled by thick fog. Snow falls is not very common, but usually it immediately turns to slush because of ensuing rain.

Continued from 26 of December to 5 of February the coldest period of winter is called winter chillya. During this cycle the cold air from the Arctic and Siberia is invading, weather fast changes, air temperature decreases. On Ustyurt, for example, frosts sometimes reach -38 ° C, in the Surkhandarya region -20 ° C. The winter in the mountains is more severe and lasts 3-4 months.

Spring in Uzbekistan is usually early. It is at the end of February - beginning of March. So to the Women's Day a romantic atmosphere with wonderful bouquets of tulips and yellow daffodils is formed.

Sometimes in spring there are light frosts, which may be accompanied by snowfalls and damage gardening. 40% of annual precipitation falls in spring. Sometimes the rains fall as heavy showers, and then mud flows are formed in the mountains. Violent dirty and rocky streams destroy everything in their path.

In April - May, the air temperature rises, the air is warming up, there is less precipitation, summer begins.

The most favorable time for a guided tour in Uzbekistan is spring (April-June) or autumn (September-November). You can find a way and to come here in spring and summer. These are totally two different, but equally beautiful and amazing sceneries. Natural landscapes are very diverse and picturesque. On Uzbek territory one can found grim deserts and blossoming valleys, snow-capped mountain peaks of the Tien Shan and the flattened plains of the Ustyurt, wild rivers and quiet backwaters of reservoirs.

Also, travelling to Uzbekistan at the end of summer, closer to the fall, you can taste sweet melons and watermelons, fragrant peaches, ripe and juicy pomegranates.

Precipitation in Uzbekistan is distributed unevenly due to the location of the country in the depths of the vast continent, the wide variety and intricacy of the terrain. The most arid is the western lowland area and the Ferghana Valley. From the plains to the foothills there are more rains. 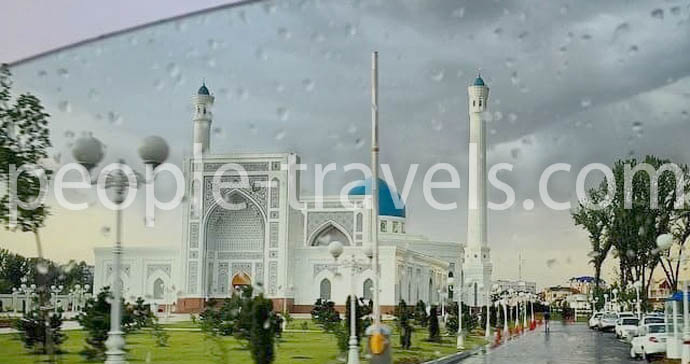 The dampest seasons of Uzbek weather in a year are spring and winter. Spring precipitation is 40% of the annual amount, and in some mountainous areas they are more. Summer precipitation is very small, and its share decreases from north to south from 20 to 1%.

The average annual rainfall is slight, so agriculture is more dependent on irrigation.